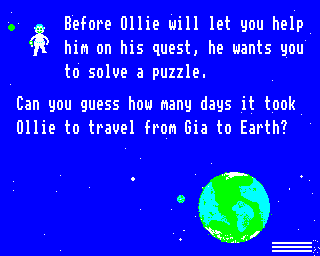 At the start of this challenge, a picture of Ollie shall appear at the top of the screen, with the text "Before Ollie will let you help him on his quest, he wants you to solve a puzzle." to its right; once you have pressed Space, the text of "Can you guess how many days it took Ollie to travel from Gia to Earth?" will appear on the screen. Once you have pushed Space again, the numbers 1-15 will appear on the screen with the text of "Use the space bar or the arrow keys to choose a number, then press RETURN." beneath them - and the correct answer is randomly-generated, so if you choose a number that is fewer or greater than the correct one (which you almost certainly shall, due to the fact that it is randomly-generated), the texts "Your guess is too small.", "Try a bigger number." or "Ollie's answer is bigger than that!" (for one that's at least two less), "Too small but you are really close!" (for the one that's one less), "Too big but you are really close!" (for the one which is one more), or "Your guess is too big.", "Try a smaller number." or "Ollie's answer is smaller than that!" (for one that's at least two more) will appear on the screen (the number will also turn cyan if it is too small or green if it is too big), and you will have to push Space to guess again. Once you have chosen the correct number, the text "Brilliant! That is exactly right. Ollie thinks you will be a great help on this quest." shall appear on the screen; once you have pushed Space for a third time, the game will proceed onward to the second challenge, in which you must find four space-related words in a puzzle for Amina and Jenny before Martin can tell them his news. However, if it took you more than four attempts to pick the right number, the text "This puzzle can be solved with only four guesses. Do you want another go?" shall appear on the screen, with the options "Yes" and "No" below it - and if you select "Yes" the text of "Ollie will choose a different number for you to guess this time." shall appear on the screen, and you shall have to press Space for a fourth time to send time back to the beginning of the challenge (but with a different number of days between Gia and Earth). Selecting "No" after taking more than four attempts to choose the correct number (the game will always ask if you wish to try the challenge again in this case regardless of how many times you repeat it) shall also cause the game to proceed to the second challenge as usual.

[Go to top]← Walkthrough | How long in space? | Word searching →