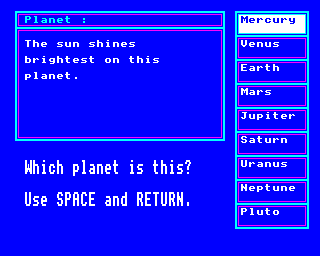 At the start of this challenge, the text "'Now I can find Earth,' says Ellie, 'It is the third planet from the Sun.' 'I need to know what Earth is like so that I can be ready to land.' 'I have some descriptions of planets. Can you help me sort them out?'" shall appear on the screen; once you have pushed Space to continue, the text "Planet:" shall appear on the screen with a randomly-generated description of a planet and the text "Which planet is this? Use SPACE and RETURN." below it, along with the names of the planets to its right. Once you have chosen a planet, the planet's name will appear to the right of the text "Planet:" with the text "Report on planet surface" below it - and if you chose the right planet the texts "The description is correct." and "This seems to be the right planet." shall appear below that as a one- or two-word description of the planet in question appears below its name, and you shall have to press Space to continue. However, if you chose the wrong planet, a message specific to the planet you chose and the text "This does not seem to be the right planet." (or "Good guess, but that's not it.") shall appear below the text "Report on planet surface", and you will again have to press Space to continue; the planet described in the above screenshot is also Mercury, and the one-word description of it that shall appear below its name once you have chosen it correctly is "Bright". But if the game gives the descriptions of any of the other seven planets which aren't Earth (as it always saves Earth until last) beforehand and you choose it wrongly, the text "You would need to wear dark glasses on the surface of this planet." will appear below the text "Report on planet surface" - and the other eight planets' descriptions, names, shorthand, and incorrect-answer messages are listed in the table below:

Once you've pressed Space to continue for a minimum of a tenth time, the text of "Ellie says, 'If Earth is mostly water, I will have to get ready for a wet landing.' 'I hope I can find somewhere to dry out!'" shall appear on the screen; once you have pushed Space to continue for a minimum of an eleventh time, the game will proceed to its eleventh challenge (and as with the third, fifth, and sixth ones, you must choose to play it on "Easy" or "Hard" difficulty).