Elite Beat Agents is a rhythm based game, so remember to turn up the sound or use headphones while playing!

In single player mode, missions (songs) are selected on a 3d globe. Missions are represented by objects on the globe with either a "Help!" or a medal hovering above them, depending on if the song is passed. The globe can be panned around with the touch screen.

The official website has videos on how to play, straight from the game.

The main object of the game involves tapping numbered buttons on the touch screen, while a story plays out on the top screen. There are three different types of objects:

The top button should be pressed immediately, followed by the two in numbered order, following the trail.

These are round buttons with a number on them. They are color coded by phrase. If more than one button is in a phrase, then the buttons should be tapped in the numbered order. There is usually a trail between the buttons to help with the order. Additionally, the easiest difficulty mode also has a hand that moves and points to the button that should be hit next. 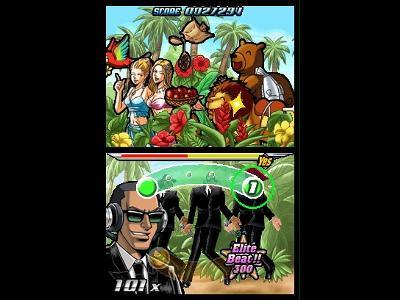 The phrase marker at the top should be pressed when the circle is the same size, just like a button.

Phrase markers require the stylus to be held down along a colored trail, and moved along at a rate indicated by, oddly enough, a rolling beach ball. The trail starts with what looks like a regular button. Little dots along the path are spaced by the songs tempo, and are gobbled up in a manner very similar to Pacman by the rolling beach ball. The beach ball will glow with a ring if the stylus is kept on it. 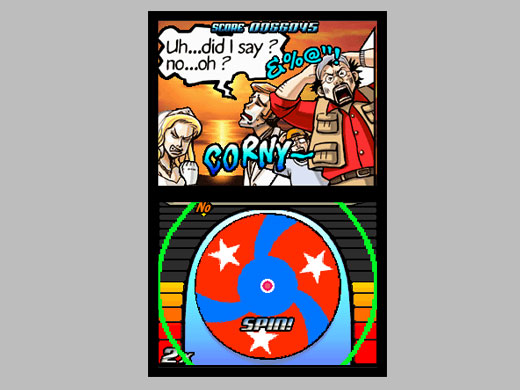 When a large starred turntable with meters on either side appears, scrub the touch screen in circles like mad! Any direction will work, as long as it's fast. The more you spin the more the meters on the screen fill. They must be filled all the way to get the beat, but if there's still time to spin (indicated by the decreasing circle), than extra spins add bonus points, so spin fast and spin often!