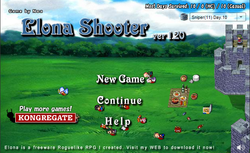 Indie developer Noa released Elona Shooter, a browser-based "castle defense" flash game, on October 27, 2009. The game has received a 4.25 out of 5 rating on Kongregate, and similar ratings on other websites.

It is loosely based on Noa's Elona RPG, though the only real similarities are graphics styles and themes. The gameplay is largely reminiscent of Japanese RPGs, drawing much inspiration from games like Bowmaster Prelude.