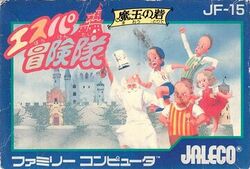 Esper Boukentai is a platform action game developed by Jaleco for the Famicom and published in 1987. It is an exploration game which uses Jaleco's arcade game Psychic 5 as the basis for the story and the cast of characters which you use throughout the game. Each character possesses different attributes, including their jumping ability, their ability to hover in mid-air, and their strength. As in the arcade, some characters must be rescued in order to make them playable. This game boasts over 50 household items which serve as animated enemies throughout each level. The game was never sold outside of Japan, or translated from Japanese to any other language.