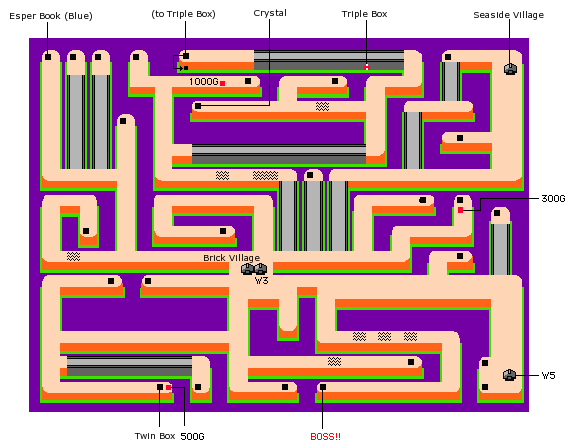 As stated above, there are no maze-like dungeons in this world. All dungeon entrances lead to single screen-sized rooms that are not connected to one another in any way. The only dungeon which contains a unique feature is the one found near the Triple Box which can be seen near the top of the world. This dungeon contains a secret exit which will take you to the grass which lies below the normal land that you walk across, and allow you to collect the power up.

In addition to the NOM-1 robots, you will encounter the following:

The fourth Mystery Capsule is possessed by the mystical Egyptian faces known as Tutamen. When you arrive in its chamber, you will see two harmless faces in the ground. Attack either one of them and they will come to life. Those identical in appearance, they have distinct behaviors. They both flying around the room, but one relies on firing projectiles, while the other relies on crashing into you. Hopefully, you collected the blue ESP book, and have the Triple Box, which will make this fight substantially easier. Your best bet is to use Psi Beam exclusively, and focus the majority of your attack on the projectile firing face. Don't bother attacking the other face until the projectile firing face is defeated as that is the greater threat of the two to your health. Activating Barrier every now and then is also a good defense strategy. Once one face is defeated, you can focus your efforts on the remaining face.