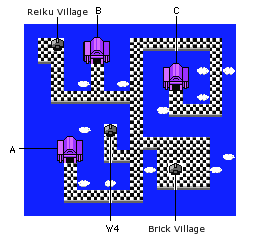 Click on the maps below for a larger view.

Reiku is a Japanese word which can be translated as "an elegant phrase," which is intentionally ironic since the people of this town are anything by elegant.

The final Mystery Capsule is possessed by the demonic Geerasauzan, which with a demon's head and six arms, resembles a mutated sort of chess piece. Make no mistake, Geerasauzan is powerful. It hops around the room in an attempt to squash you, and will use the most powerful flash attack available to any enemy, and it can even freeze you. Even with the Barrier Suit and the red ESP book, it would be very wise to purchase a few Life Bulbs and Angel Arms from the pharmacy in Beverly Village in the second world before you attempt this fight. If you are fully equipped with such items, your only strategy should be to fire Psi Beams at it as frequently as possible, only moving away periodically to avoid obvious attacks. There is little else you can do to defend yourself, so you might as well spend as much time on offense as possible.

Once you defeat Geerasauzan, all of the enemies will disappear throughout each world. But the game isn't over yet. You are still trapped inside the world of the story book until you find the method to return to your own home. Throughout the game, you have received hints from villagers, and once you received Alice's Necklace, the old man in the upper left corner of Brick Village will reveal the entire clue to you. Can you figure out the way home?

How to go home
The clues which you are given refer quite frequently to the clock stand in Brick Village, the two treasures: the wand and the garnet, and the fact that the sun rises at 5:45. Every time you enter the clock stand, the man behind the counter seems to randomly rattle off some time. Once you have five capsules, the wand, and the garnet, enter the clock stand repeatedly until the man reports that it is 5:45. At that time, you will exit the building, and the warp from this world to your home world will appear. Then you will be able to view the game's ending.