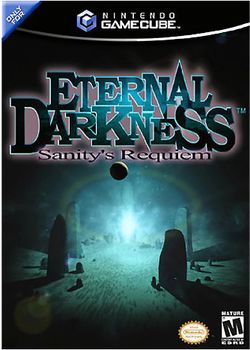 Eternal Darkness: Sanity's Requiem is a survival horror console game exclusively for the GameCube, largely inspired by (but not directly adapting) the works of H. P. Lovecraft. Developed by Canadian developer Silicon Knights, it was released on June 24, 2002 and published by Nintendo.

Alexandra's part of the game, at the mansion in 2000, forms the hub. The player finds the book, and Pious's story, first. Then Alex finds the first Chapter Page, leading the player on to the next section of the game as a different character. This character's story provides plot exposition, and once complete, the player as Alexandra has knowledge, an object, or an ability which allows her to find the next Chapter Page, highlighting another character, and so on.