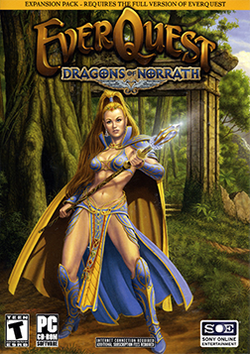 EverQuest: Dragons of Norrath is the ninth expansion for EverQuest. It mostly includes missions given out by an NPC that are completed by a group of players, in instanced zones. It includes a revamp of the Lavastorm zone where the missions are acquired, and an uninstanced zone called The Broodlands where the instanced zones can be accessed. The content revolves around dragons and related monsters. When completing the missions, players receive crystals that can be exchanged at merchants for items.

This expansion also innovates on previous ones. For example, the instanced zones are also available in uninstanced versions, allowing people to explore them and gain experience by simply killing monsters without going into missions. It also has four major raid targets, and some smaller scale raids, including Vishimtar, a very powerful dragon.

The content in Dragons of Norrath is suitable for characters of level 45 and up.