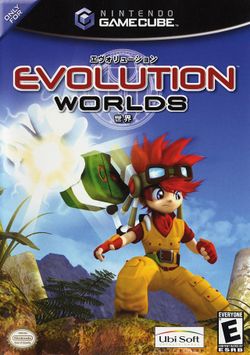 Evolution Worlds (エヴォリューショ 世界, Evoryushon World?) is an RPG for the Nintendo GameCube. It was developed by Sting Entertainment and published by Ubisoft on December 3, 2002. Evolution Worlds is a dungeon crawl game starring a character called Mag Launcher. It was a re-release of two separate games, Evolution: The World of Sacred Device and its sequel Evolution 2: Far Off Promise, from the Dreamcast.

The game is set in the year of 930. An ancient civilization had met its demise one thousand years before. Special individuals are able to use Cyframes, ancient tools, which were excavated from the ruins of the ancient civilization. These individuals are known as 'Cyframe users' or 'adventurers,' and are assigned jobs from the Society, a research institute. The adventurers use their Cyframes to explore ruins.