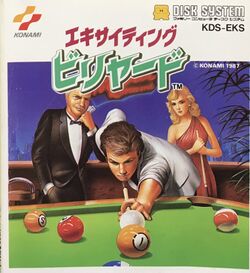 Exciting Billiard is a billiard simulation game developed and published by Konami for the Family Computer Disk System in 1987. It was the first of Konami's "Exciting Sports" series produced for the Nintendo Famicom, similar to Namco's own "Family Sports" label. Exciting Billiard offers players four modes of play. Break Shot is a single player only mode, where the player competes against other pool hustlers for money, attempting to earn enough money to graduate to higher and more impressive venues with increasing amounts of money on each bet. The remaining three modes can be played with one to four players at a time (human or computer controlled), with each players' progress capable of being saved to disk.

In Nine Ball, the only legal shots are when the cue ball hits the lowest number ball on the table first. After that, any ball that is sunk is legal. The player that legally sinks the nine ball wins the game. In Rotation, the rack is set up with ten balls. Just as in Nine Ball, the cue ball must hit the lowest number ball on the table first for the shot to be legal. Unlike Nine Ball, the table must be cleared before the game is over. In Rack Game, all 15 billiard balls are in play, and you are not required to hit the lowest ball first. You may hit any ball you wish and play continues until all balls are sunk.

During play, three different views of the game are displayed. An overhead view of the table is present on the bottom portion of the screen. In the upper left corner, and "behind the ball" view is shown, giving you an idea of what angle the cue ball will connect with other balls given the player's cue stick's current direction. When the player is ready to shoot, the upper right window displays a power meter, allowing the player to choose how hard or how soft to hit the cue ball. During play, tapping

toggles the display of the numbers of the balls on the table, while holding

will allow you to cycle through all of the strike locations on the cue ball (indicated in the upper right window).

initiates taking a shot and press

once more when the power indicator in the upper right window is lit to the desired amount of power to shoot the ball.