Exciting Boxing is a boxing simulation developed by Konami and published for the Famicom at the end of 1987. It is a very unusual game in that it was sold packaged with a special controller. This controller was actually a plastic inflatable stand with the image of a boxer depicted in the front, and several sensors located on the inside. To play the game, players must inflate the stand, and literally punch the boxer on the front. The sensors inside would register the hits and transfer the information to the game, where the results of the player's punches would be shown on the screen.

The game itself is a fairly simplistic presentation of boxing, featuring a training and fight mode. Progress could be saved and restored via a password system. Fights were presented in first person perspective. There are only seven opponents, each in a different and increasing weight class. Naturally, they get stronger as the difficulty increases, and they become much harder to hit and knock down. Players must train between bouts in order to increase their speed and power to match the levels of their opponent. 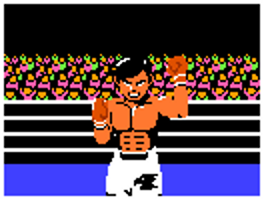 You control the player throughout the game. You are asked to provide a name for your fighter at the beginning of the game, as well as whether you are right handed or left handed. Your fighter is considered to be from Japan. At the beginning of each fight, your current match, win, loss, and draw counts are displayed.