At the start of the game, you get 9 lives, 99 ammo and 10 grenades. Lives are depleted when you take a direct hit from a projectile or alien, with the game ending once lives reaches 0. Ammo and Grenades may be replenished by a white or yellow pickup, and will also be replenished when losing a life.

Your blaster can hit floating aliens, but is blocked by obstacles. Later, you will encounter a force field, which takes 25 blaster shots to destroy. The grenades are used to destroy obstacles or turrets.

Some zones have aliens spawn from the right. They will appear at your level in two or three positions. If it approaches high, you need to duck udner it. Otherwise, you need to shoot it. They stop their approach when you reach 3/4ths of the distance, where you see the lives indicator, but there is dangerously low reaction time available at that point. This is fixed by firing a few shots before reaching the dangerous section

You have 20-30 seconds to complete a zone. If this time limit is reached, an indestructible enemy will approach quickly from the right. If you manage to dodge it, it will reappear on the right again. This timer is reset only on advancing to the next screen or losing a life.

In some places, you may opt to retrieve a more powerful armor, known as an exoskeleton. This lasts until the end of the 25-zone block (even when you lose life), and gives you a doubled shot and makes you immune to most background hazards. You won't receive the 10000 bravery bonus, but survival is a better option. 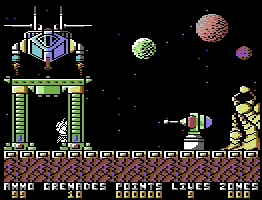 A teleport found in Zone 2. 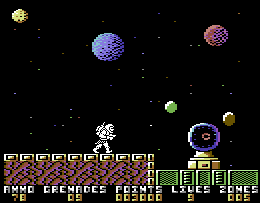 This zone is a repeat of 25-49, with only cosmetic differences past zone 101. Completing this zone returns you to the beginning of the game.