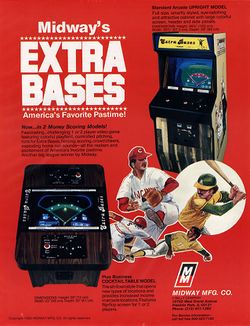 Extra Bases is a baseball arcade game which was released by Midway Games in 1980; it runs on the company's Astrocade hardware, and is the fourth and final title in their Midway Baseball series. The gameplay is fundamentally the same as that of its three monochromatic predecessors, but the pitching player's joystick has now become an analog track-ball (which also controls the outfielders, before the pitch and after a hit), the batting player's button will now also control the advance of the runners when pressed and released, and (in the case of the cocktail cabinet), the screen will flip to face the pitching player each time three outs occur which means that the batting player will always have to look at the action upside-down - and in a one-player game, the player will receive an extra inning, if he manages to beat the CPU. Sound is also now generated by a Midway Astrocade chip.