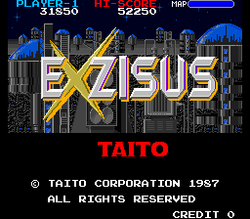 Exzisus (エクスザイサス, lit. Ekusuzaisasu), is a horizontal scrolling shooter arcade game, that was released by Taito Corporation in 1987, only in Japan; it utilizes four Zilog Z80s (three at 6 MHz and one at 4 MHz) with a Yamaha YM-2151 running at 4 MHz for audio. The player must use an 8-way joystick, to take control of a space astronaut (who is the eponymous "Exzisus"), with two buttons to make him fire shots at (and, drop missiles on) enemies, and launch his bird- and dog-like robots at them - and there are also several different powerups that he can collect to aid him in his mission: L (Laser Light Blaster), D (Disruption or Destruction depending upon the palette), M (Missile), F (Full Automatic), A (Aerodynamic Power), O (Option), and, in some versions of the title, B (Barrier). The fifth of these will also transform Exzisus into a Darius-like turbo jet when collected and provide him with protection from death (for one hit); when hit, he shall return back to his regular humanoid form.