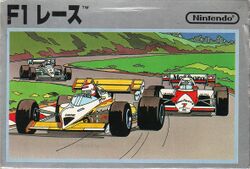 F1 Race was the first racing game developed for the Famicom, developed by Nintendo. It was the seventh best selling Famicom game released during 1983 and 1984, selling approximately 1,520,000 copies in its lifetime. It is remarkably similar to Namco's Pole Position, with a much more varied selection of race tracks. As a result, while Namco released a string of their classic arcade games for the Famicom, Pole Position was omitted, presumably because it was rather identical to F1 Race. This game went on to serve as the inspiration for the Game Boy game F-1 Race, which was the first game to make use of the 4-player adapter that allowed four Game Boy players to compete.