From StrategyWiki, the video game walkthrough and strategy guide wiki
(Redirected from FIFA 11)
Jump to navigation Jump to search 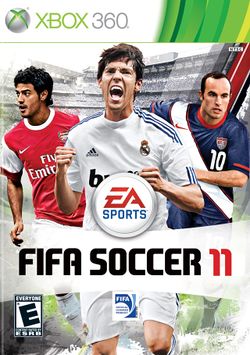 FIFA 11 (FIFA Soccer 11 in North America) is the 18th title in Electronic Arts' FIFA series of soccer video games. Developed by EA Canada, it was published by Electronic Arts worldwide under the EA Sports label. It was released on September 28, 2010 in North America, September 30, 2010 in Australia, and October 1, 2010 in Europe for all platforms, except the Wii and Nintendo DS. The Wii version was released on October 1, 2010 in North America and Europe and the DS version on October 8, 2010. The Windows version of FIFA 11 is the first in the series to use the same game engine as the PlayStation 3 and Xbox 360 versions. Commentary is provided by Martin Tyler and Andy Gray.