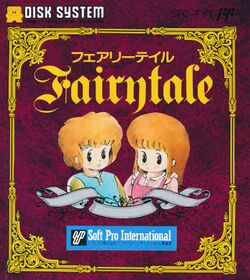 Fairytale (フェアリーテイル, Fairytale?) is a fantasy strategy game by Soft Pro International for the Famicom Disk System. It was never released outside of Japan. It is a turn-based war strategy game that takes place in a fairy tale world. The player and their units must fight off an invasion of pigs by encountering them on the map and fighting in strategic battles. The opponent and player commit to a course of action and watch both sides move and act simultaneously. In this respect, the game is very similar to Soft Pro's earlier FDS strategy game 19 - Neunzehn. As with that game and a modern example like Frozen Synapse, the challenge is not only out-maneuvering their opponent but also correctly predicting their next plan of attack and reacting ahead of time.