Head of State is a quest concerning the Lincoln Memorial, which is occupied by Slavers, and Temple of the Union, who hold the escaped slaves.

When you approach the Lincoln Memorial, a slaver will mention that you should stay off the steps, as the slavers will shoot anyone on sight. In addition, the area around the memorial contains traps; the only safe location is a path to the maintenance door on the left, and you are directed there to speak with Leroy Walker.

Leroy Walker has two tasks for you. The first is to retrieve one of several artifacts from the Museum of History. The artifact will be marked on your Pip-Boy, and is on the upper floor of the Museum of History Offices, in the same room as the turret. One artifact is a sound recording of Lincoln's Voice. Return to Leroy Walker to receive a 50 cap reward, and permission to enter the memorial.

The other task involves looking for a few runaway slaves to the north, near Old Olney. He will give you about 100 caps for recovering the slaves (but not killing them.) Speak with Walker to have the slavers commence their several-day long travel to the temple. Once they have gathered, speak with Walker to start the attack.

The Temple of the Union is a group of runaway slaves, located Northwest of Canterbury Commons. They will let you in when you ring the doorbell and say that you are here for trading. When you reach Hannibal Hamlin, you can talk to him and learn that he is the group of escaped slaves trying to avoid capture from the slavers. 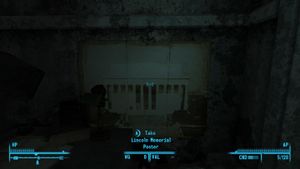 When you have the picture, return to Caleb and give it to him. You now need to speak with Hannibal to start the temple on its multi-day journey to the memorial. The only remaining task is to clear the slavers from the monument.

Note: If Hannibal dies, you cannot progress along this quest track.

The artifacts within the Museum of History can be sold to three people. You can either sell them to Leroy Walker, Hannibal Hamlin, or Abraham Washington from Rivet City.

The coin collection and action figure can be sold to all three subjects for the same price.

The memorial poster can only be sold to Leroy. You can recover the poster by killing him or by pick-pocketing.

An exploit exists allowing you to pickpocket Lincoln's har from Hamlin, and sell the hat to him again. To do so, you need to plant a piece of headgear, such as a hockey mask.