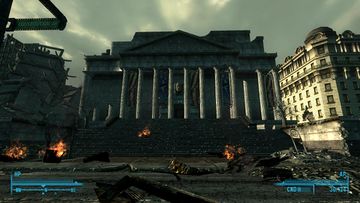 Abraham Washington from Rivet City is located within the Capital Preservation Society. He desires an extremely important document concerning US history - the Declaration of Independence. Without it, all his other documents and artifacts are missing most of their value.

The document is located within the National Archives, east the Museum of History and across from the Museum of Technology. The quest dose not reveal the location on the map, but you can ask Abraham for its location. Reaching the location requires getting through a large trench network filled with super mutants.

As you approach the building, you will pickup a new radio signal concerning Reilly's Rangers.

The first item of note in the archive is a Guess and Win trivia game, found in the main atrium. If you want to complete it, the answers are as follows:

This game is brought to you by Med-Tek, and the prize is one of:

Greedy credit
If you obtain the declaration without contacting Sydnay, she will appear later as a random encounter.

On the far side of the atrium, you will see a person behind a few barricades and mines. When you approach, she will mention to come over. Speak with her, and she will introduce herself as Sydney, but mention that super mutants are arriving.

The super mutants will arrive in two waves, with the second wave including a rocket launcher. When you defeat them, she will give a better introduction, and offer to assist you in obtaining the declaration in exchange for part of the reward.

If you kill Sydney, you will obtain her unique 10mm sub machine gun, the "Ultra". You don't need her help to successfully complete this quest. The weapon is good up close using VATS and has a 50 round clip with better damage.

After speaking with Sydney, she will direct you through a secret elevator in the floor. This allows you to enter the Secure East Wing more quickly (instead of using the entrance in the back.)

You will hear announcements from time to time, to rally the troops. This refers to the patrolling robots, which will treat you as hostile.

Sydney will mention that there are a few security doors that can serve as shortcuts. The first door is unlocked with a science skill of 67.

When you reach the chamber containing the declaration, Button Gwinnet will approach. He will accuse you of being red coats and give you the option to surrender. While you can use a speech check to obtain the document, you also have the option to kill him, use the terminals to recall him, pick the necessary locks (requires lockpick 100), or talk to him for an additional aspect of the quest.

If you choose to disable him, you can enter the room in the back to retrieve the document. 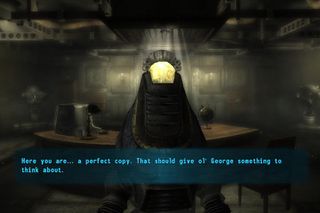 Button Gwinnet asks you to create a forgery, but will need ink in order to do so. This ink can be found in the Arlington Library, and is found in the third floor in a box called "Restoration Supplies" (in the same room as the library archives). If you already have the ink container, simply speak with Button and he will create the forged version.

With this peaceful option, you can let the robot remain to guard the declaration, or to have it self-destruct.

Producing a counterfeit version of the Declaration otherwise has no impact on the result of the quest (aside from inflicting no bloodshed.)

In the secure east wing, you can also collect the Bill of Rights. This document is important to Abraham Washington.

You can also grab the Magna Carta in the same area as the Bill of Rights.

To the east of the atrium, you can also enter the office to collect additional prize vouchers, which can be traded for additional fruit Mentats.

When you brig the document to Abraham Washington, he will reward you with the schematics for the Railway Rifle. Sydney will be rewarded separatly.

After a final discussion with Sydnay, she mentions that she is done with treasure hunting for a while, and will be in the Underworld.