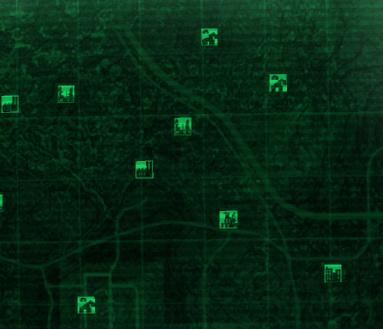 Oasis is a small community located in the far north of the Capital Wastelands, with only one small pathway to access the region.

The easiest way to find the rout is to start at MDPL-21 Power Station, and to arrive from the west.

Notable items and events include:

This SatCom Array is a set of three towers home to raiders.

They have a variety of weapons available. The south-west tower (building A) contains a Sawed-off Shotgun, pistols, and a sniper rifle, all collectible from raiders.

The northwest tower (building C) is locked, requiring a skill of 75. It contains:

The north-east (building B) tower has no ground access. It is accessible either through the satellite dish of the south-east tower, or the basement of the north-west tower. It is home to the raider's drug lab, where you can collect Psycho, Jet and Buffout.

This is a small power station. Behind the unlocked chain-link fence, you can find:

The Clifftop Shacks is a location where Super Mutants have taken people captive.

This is a small water pumping station, occupied by raiders. The water supply is available to help heal, but it is irradiated just like other water supplies.

There is some ammunition to the damaged barn located to the north-west. There is also a lawnmower blade.

An abandoned broadcast tower for Radio Signal Echo Foxtrot. It's repeating Morse Code message is "CQCQCQ DE" and "EFEFEF K", a signal that perpetually waits for a reply.

Look for a sealed Cistern to the east of the tower; you'll have to navigate around some cliffs to reach it. It contains:

A resort home that has fallen into ruin.

Look for a skill boot, Tales of a Junktown Jerky Vendor on a bookself inside the northeastern house.

A scavenger has a small shot setup in the barn to the east.

This place is home to the Rescue from Paradise and Strictly Business quests. You can also find information about the Replicated Man quest from this location.

To enter, you must either have negative karma, pass a speech check and pay 500 caps, or capture one individual in the Fallout 3/Strictly Business quest.

You can collect Chinese Assault Rifles and bring them here to help improve the inventory of the shop. There is also a doctor here, and you can recruit Clover if you have negative karma.

This was also one of the destinations of a Nuka Cola Quantum shipment; be sure to check for boxes within Eulogy's Pad, under the stairs.

In the power substation:

In the main derelict building: