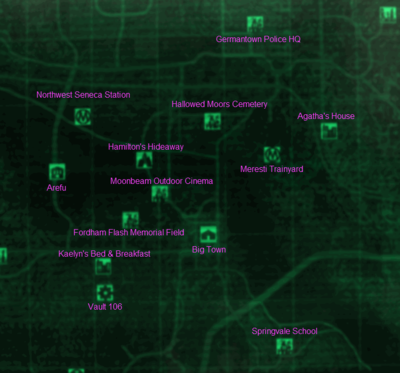 This is one of the locations in the quest Big Trouble in Big Town. From, here you can rescue Red and Shorty.

This is a ruined train station near only a few buildings. The convenience store nearby can be looted for some Sugar Bombs and pre-war money.

When you enter the station and speak with Murphy, he will mention something about Ultrajet. He will ask you to collect Sugar Bombs for him, and will provide 15 bottlecaps for each package; with a speech check, you can increase it to 30.

It also provides an underground passage to the Mereseti Trainyard.

Hamilton's Hideaway is a small outpost. It is home to radscorpions and two raiders.

In the room with two raiders, you can find a Nuka Cola quantum.

A locked door is within the area, and it requires a key to open. You can obtain the key from Three Dog by completing the Galaxy News Radio after either hearing about your father or by completing the main quest out-of-sequence. It contains various weapons and armor, as well as a Guns and Bullets skill book.

This is a small church area under control by a few super mutants. You can rescue a wasteland captive here.

You can find a skill books for medicine, science, and the second Keller Family Transcript.

The Meresti Trainyard is the main location for the Blood Ties quest. When completed with favorable results, you can sell blood packs to Vance.

Agatha's House is an important location for the Agatha's Song quest.

Arefu is an important location for the Blood Ties quest. When you first arrive, Evan will toss a grenade before apologizing and telling you about problems with the family. After checking on Ian West and the other residents, he will give you the locations of three possible places the Family could be located. If you have sufficient investigative skills, you can also gain their exact location.

When you complete the quest, the residents can periodically give you some items.

You can get the Repair bobblehead by picking the lock to Evan King's house. It is located on the table.

This location contains nothing of interest, and is encountered when en-route to Moonbeam Outdoor Cinema from Arefu.

This is suggested as a possible location of The Family in the Blood Ties quest. All it contains are a few items, and a Pugilism Illustrated handbook. Travelling to the east from here will bring you near some Super Mutants.

This is a featured location in the Big Trouble in Big Town.

You can get a lucky 8-ball from here. If you have sufficient medical skill, you can heal Timebomb in Red's clinic. Doing so will also allow Red to provide free healing.

This building is ruined, and now controlled by Raiders. You will find raiders on the second floor of the building, as well as on the nearby bridge.

Vault 106 is part of the vault project, specializing in the introduction of hallucenegens.

The residents found in the vault are not the original residents; they are raiders driven insane by the gases. The gases are still active, and will cause the player to experience a purplish hallucination where he sees characters from Vault 101.

The last enemy in the vault will activate a stealth boy before attacking.

The underground tunnels contains a workbench, a copy of Dean's Electronics.

The inner tunnels contains a Ryan Briggs' lab room, which can combine Mole Rat meat and Wonderglue into Wonder Meat. You can a find a Nuka Cola Quantum, a speech skill book, and some supplies required to operate the machine.

To the north-west of the station is Gold-Ribbon Grocers. It contains a Rube-Goldberg contraption activated by stepping on the pressure plate; it eventually releases a mini-nuke and a lockpick skillbook, if it is not disarmed.

To the south of the station is Radio Tower Oscar Tango. You can find the entrance to the HAM radio by opening the drainage ditch on the main street.

Springvale School is a ruined school now controlled by raiders. The raiders also attempted to invade Vault 101 by digging a tunnel, but are stopped by an underground ant colony.

You can find a sheet music book within the south-east room on the ground floor.