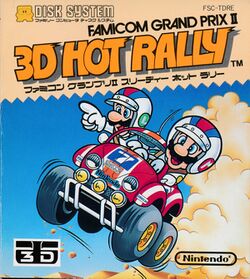 Famicom Grand Prix II: 3D Hot Rally is a racing game developed by Nintendo for the Family Computer Disk System. Nintendo designed and programmed Famicom Grand Prix II: 3D Hot Rally with auxiliary program support from HAL Laboratory. The game was one of the dozens that Nintendo and HAL Laboratory developed in conjunction for the Disk System. Like the original Famicom Grand Prix F1 Race, it was released in special blue-colored Disk Cards, which supported Nintendo's Disk Fax peripheral, allowing players to send their course completion times to Nintendo for the chance to win prizes. This was the final game to support the blue Disk Card format.

3D Hot Rally is a rear-view rally racing game where the objective is to complete each course within the given time limit. The player can choose between three possible courses, as well as three possible cars, each with its own unique characteristic. The game supports the Famicom 3D System, allowing the player to see the screen in three-dimensions by wearing a specialized set of goggles. Each course is broken into several legs and, at certain points along the race, players are given the opportunity to choose which direction they wish to travel when they reach a fork in the road.

There are three different kinds of vehicles in the game, each with its own performance specification. 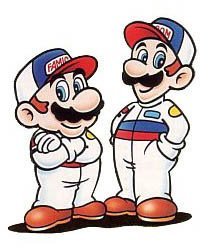 Mario plays the role of the vehicle's driver, while Luigi serves as his navigator. Although both brothers are shown prominently on the game's cover (making this the first game in Japan to depict Luigi in his taller and slimmer design), they only appear during the game when they get out of their vehicle either to repair it or after they successfully cross the finish line. 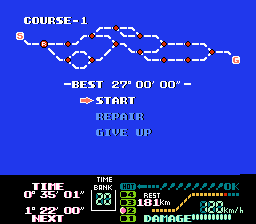 There are three different courses in the game. Each course is composed of several paths, constructed from different legs. You will only choose one path through the course to reach the end. Before the race begins, you are given the opportunity to select a special Repair Point. This is a check point that will repair all of the damage sustained by your vehicle if you drive through it. Note that it is possible to select a particular check point as the repair point and never drive through it if you choose the wrong directions along the way. When you approach a fork in the road, be sure to pause the game and make sure you know which direction to take so that you don't miss the Repair Point that you selected.

When the game begins, the player starts with 20 seconds in the Time Bank. While you race through each leg of the course, your time is displayed on the left side of the bottom portion of the screen. Below your current time, the "Next" time is displayed. This is the par time that you are aiming to complete the leg by. For every second longer that it takes you to complete the leg, seconds are taken away from your time bank. If the time bank reaches zero, the game will end. However, if you complete the leg of a course in less time than the time indicated, the number of seconds that you beat the clock will be added to your time bank. 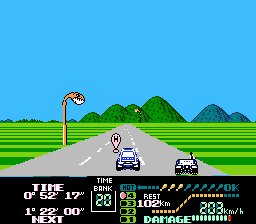 Located above the player's speed meter is a "Hot" indicator which is represented by eight exclamation marks, which can be filled up by picking up exclamation mark-shaped symbols with the letter "H" along the road. Normally, each vehicle is limited to a top gear of four. However, when the player collects eight hot marks, the player can access a fifth gear, and accelerate their vehicle to a top speed of 300 km/h without slipping off the road for a period of 15 seconds. This can help the player reach the next checkpoint or the goal more quickly. However, at such speeds, bumps in the road will send the vehicles quite high into the air, making it more difficult to control where they will land.

Hot marks appear in groups of fiver at predetermined locations along the course. They appear in three different arrangements:

Below the player's speed meter is a damage indicator which will deplete every time the player's vehicle collides with another vehicle or a hazard. When the damage indicator is fully depleted, the game will end. To avoid this, the player can pause the game and select "repair" from the sub-menu to restore the character completely; however, the more damage the vehicle has taken, the longer the repairs will take (the player can speed up the process by pressing either button). The game can also be set so that the player's vehicle will be repaired automatically after passing through certain "repair points". 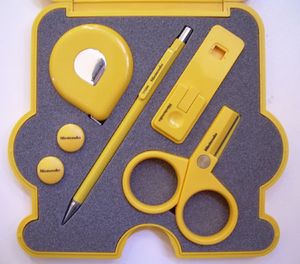 The prize for winning the 3D Hot Rally tournament was the official Nintendo stationery set, Disk-kun case, white box, and letter. It included a mechanical pencil, scissors, tape measure, magnets, and hole puncher. Two colors of the set are known to exist: yellow and white. The yellow set had “Nintendo” written on the items in the set, while the white set has “Disk-kun” written in Katakana. All the letters and promotion posters show the yellow set, so little is known about the origin or distribution of the white set. From what is known, the stationery set (at least the yellow, and perhaps the white) was given to 10,000 people: 2,000 to the high scorers on each of three tracks and 4,000 in a raffle.