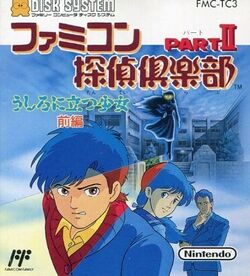 Famicom Tantei Club Part II: Ushiro ni Tatsu Shōjo (ファミコン探偵倶楽部PartII うしろに立つ少女, Famicom Detective Club Part Two: The Girl who Stands in the Back?) is a text-based adventure game developed and published by Nintendo for the Famicom Disk System. As part of a two-disk series, the first disk (Zenpen) was published on May 23, 1989, while the second disk (Kouhen) was published on June 30, 1989.

The second game is a prequel, and opens three years before the events of The Missing Heir The prologue scene depicts an autumn night as a 15-year-old boy (the protagonist of the game) is on the run from two police officers. A man, respected by the police, decides to care of the situation by himself. The man takes the boy to a coffeehouse, where the boy explains that he ran away from his orphanage to find his parents' whereabouts. The man introduces himself as a private detective named Shunsuke Utsugi, and convinces the boy to become his assistant.

A few months later, Utsugi and the protagonist receive a phone call to check over a crime scene. The murder victim is a freshman schoolgirl named Yoko Kojima. The protagonist begins gathering information from Ushimitsu High School to solve the Yoko case and connect it with the Genjiro Kaneda case along with the help of Yoko's two high school friends; a girl named Ayumi Tachibana and a boy named Hitomi Kawaii. It soon emerges that Yoko was deep into an investigation of "The Tale of the Girl Who Stands Behind," a rumor involving a ghost of a blood-soaked girl that stands behind a student, and the trio set out to discover the truth behind this rumor.