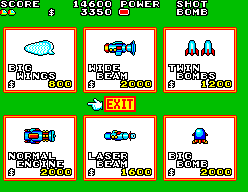 As the name of this round implies, Pastaria harkens back to Fantasy Zone's past. Not only is it reminiscent of the original Fantasy Zone's first stage, Plaleaf, a couple of the enemies that you encounter here are shrunken versions of bosses that you faced the first time around. There are three different scenes to visit, all of them taking place in lush green environments. Learn how to use the warps to manage the amount of danger you face. Collecting money is a little easier in this game, so try to gather around $3000 before you visit the shop. Grab the Big Wings and then choose between the Twin Bombs for more rapid bombing, or the Big Bombs for more power. The other more powerful weapons shouldn't be needed to get through the first level of the game.

The bases in Pastaria are the Macarollins. Like all bases throughout the game, they remain airborne and stationary. They are the weakest bases in the game, and can be knocked out with either four regular bombs or two big bombs. Learn how to scoop up the $500 bills that float to the ground whenever they are destroyed (unless they are instead hiding a warp). They are scattered throughout the level at various heights ranging from the middle to the top of the screen. 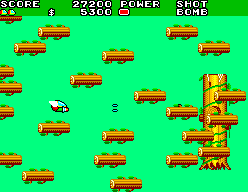 In another similarity to the original game, the boss of the first round is a wooden creature. This one is known simply as Woodpole. He appears on the right side of the screen, and remains there while he floats up and down. As he does, a flood of logs float across the screen from right to left. Within the logs, you'll find pockets of safety which you must fly through in order to survive the ordeal. All the while, you want to fire continuously in an effort to damage, and ultimately destroy Woodpole. As he takes damage, his eye will darken. You'll have an easier time attacking him from higher up on the screen then below since your bombs drop down. But you have to go wherever you can safely situate yourself among the logs. Other than the logs, there is no other threat to worry about. Woodpole does not do anything else to attack you directly. Be ready to catch the money that drops to the floor when he is defeated, you aren't given much time to gather it all.