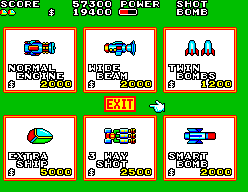 Sarcand appears to transition from the natural scenic beauty of Pastaria, to a land of geometric shapes and crystals. The enemies here are a bit more aggressive than in the first stage, flying in straight directions with no intention of changing course. Once again, there are three different scenes to visit, and a total of 15 bases to destroy. The shop doesn't offer anything particularly game changing. The Normal Engine is a speed boost over the Big Wings, and you should pick up Twin Bombs if you passed them up on the previous stage, or lost a life. At $5000, the extra life is a luxory that you should only buy if you can truly afford to. You'll want to save your money for more valuable items coming up. There's a valuable hidden item that you can obtain for free if you know where to look.

The bases in Sarcand are called Pracknicka. They are a bit stronger than the bases of the previous stage, with almost twice as much health. It will take seven normal sized bombs, or four big bombs to destroy them. They appear at a variety of heights, ranging from the bottom of the screen to the very top. Keep your eyes open for all of the other enemies flying around you, and try to catch the dollar bills early on after defeating one so that you don't have to detour to the bottom of the screen. 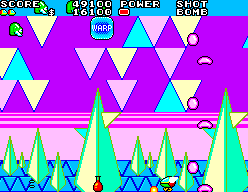 There is one important secret item found in the second round. It is the first Red Bottle that you can obtain, which will increase the length of your power meter, allowing you to take more damage before dying. It can be found in the same section as the shop. Fly low to the ground and shoot ahead until you notice your shots hitting something invisible along a spike below one of the warps. Shoot it until the item appears, and collect the bottle to extend your meter for free. 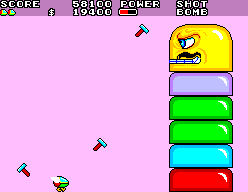 The boss of the second stage is known as Hangmerudia. He appears on the right side of the screen, and moves left and right. While he moves about, he flings hammers throughout the screen. At first, they are fired upward, and the gradually angle lower and lower until they are fired at the bottom of the screen. Then they hammers immediately start moving upward again and repeat the process. The weak point of Hangmerudia isn't actually his head; it's the segments of the body beneath the head. As you shoot them, they change color, until they are ultimately removed from the screen. When they are removed, all of the segments and the head above drop down. Hangmerudia is defeated when all of the segments are destroyed and the head hits the floor. At that time, he explodes in a pile of coins and dollar bills.