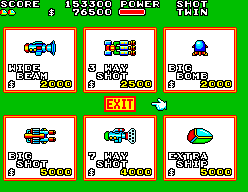 After passing through the cold round, you are taken to the opposite extreme. Bow Bow is a round of volcanoes and lava. It continues the new normal of five sections. To help you out in case Opa Opa has been destroyed and you've lost all your items, there's not one but two shops on this stage, and both are out in the open. One stage specializes in bombs and engines. You'll want to pick up Big Wings or Normal Engine at the very least, and Twin Bombs if you prefer them to Big Bombs. The other shop (shown right) sells more guns, and it also sells Big Bombs and an Extra Ship. If you haven't purchased Big Shot from the secret shop in the previous stage yet, do so now.

Kuenma is the name given to the bases in Bow Bow. They are stronger still, requiring twelve normal sized bombs, or six big bombs, to destroy them. Most of these bases occupy a space somewhere near the middle of the screen, rarely very high or very low. The frantic action of all the enemies can make it tough to focus solely on destroying bases, so make sure you clear the area of threats before you resume your base-busting task. 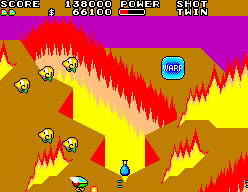 The fourth round secret is hidden on the brighter of the two sections which contain shops. The section is lined with bright yellow fire which pokes out from the ground. In a region where that fire extends down towards the bottom of the screen, shoot the lowest point (a bit above the floor) until the secret item reveals itself. It is a blue bottle, replenishing all of your lost energy. Grab it when you are in need, or before you go to battle the boss. 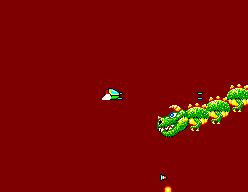 The boss of the fourth stage is named Bombdran. He is a very long dragon that slinks his way back and forth across the screen. He moves up and down in a wave like motion, and his vertical momentum is not interrupted when he bounces off the left or right sides of the screen. As he flies around, he will occasionally spit fireballs at Opa Opa. After a while, you should get a feel for where he is going to move, and fly to position yourself in a safe region of the screen where you can attack. Avoiding collision with him and his fireballs is always your first priority. Shooting him in the head should be the second. As you shoot him, he changes color, from his initial green to a very dark color, and then ultimately to a brighter and brighter blue, before he is defeated and explodes into a pile of money.