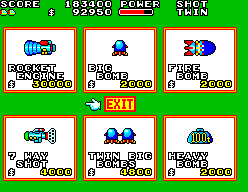 Chaprun is the watery stage of Fantasy Zone II. It has the distinction of being the only stage where all of the bases are either at the top of the screen, or the bottom. While this seems like a distinct advantage, don't let your guard drop for one second. There are two shops here, along with a third secret shop, so you'll want to spend your money wisely. As it turns out, this is the first stage where you can purchase the Twin Big Bombs. If you buy these, you'll no longer have to choose between the power of Big Bombs, or the frequency of Twin Bombs.

The bases in Chaprun are called Haihon. As mentioned earlier, this is the only stage where you will find every base of a section either at the very top of the screen, or the very bottom. At first, this seems to make the stage easier; all you have to do is stay at the top or bottom, and clear each base away. However, the enemies will make sure that you have a hard time staying in one place for a very long time, and force you to move around. You'll also have a harder time bombing the bases at the top unless you get very close to them, so be careful. 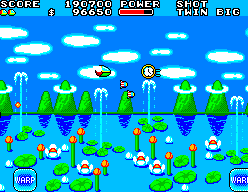 There is a secret item hidden in this stage. In the section where you can see water fountains in the distance, shoot just above the fountains until you see something invisible absorb your shots. Shoot that spot until a clock appears. As before, try to obtain the clock after you activate a powerful weapon, just before you go to visit the boss..
Secret shop 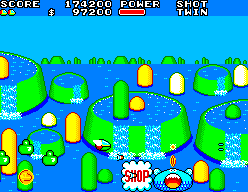 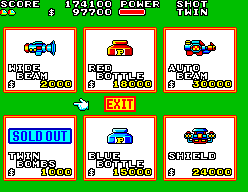 In the section with waterfalls falling off islands in the background, shoot the bottom until you see your shots being absorbed by something invisible. Continuing shooting that spot to make a third secret shop appear. Like the first secret shop, this one sells Red and Blue Bottles, along with the Auto Beam and Shield. Whether you purchased any of these items or not, they're all going to be more expensive. Never the less, you should not miss out on the chance to buy another Red Bottle to extend your life. 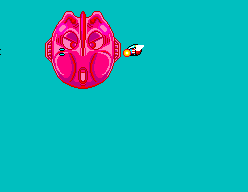 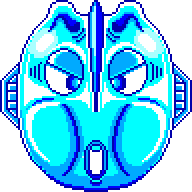 The boss of the fifth stage is called Buubuuman. This boss is actually surprisingly easy for this late stage of the game. All he does is shrink and grow, and he is only vulnerable to attack when he is at his fullest size. No projectiles are fired at you during the entire attack, so you only have to avoid getting hit by Buubuuman, who moves to your location whenever he starts growing again. Move out of the way, and into a position where you can attack for the brief period when he is full size, and then repeat the process until he is defeated.