Fuwareak is the air stage of Fantasy Zone II. It goes back to the more random distribution of base layouts, although the bases are all lined up in the middle of one section. Once again, there are two shops for you to find, along with a third secret shop which you won't want to miss. You can buy Twin Big Bombs from one of the normal shops if you lost it between now and the previous stage. On top of selling Red and Blue bottles in the secret shop, you can buy an extra life at the ridiculously low price of $100. Be sure to find it.

The bases in Fuwareak are known as Pappykarina. When it comes to base strength, they take eight big bombs to destroy, so you'll have to strike them for quite some time before they explode. The enemies move rather fast through this stage, so they won't give you a lot of time to sit and bomb. You'll need to take your shots when you can get them, and move out of the way to clear the surrounding area of enemies before resuming your attack. 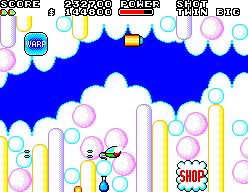 On the very first section where you arrive, you can shoot or bomb the space to the left of the shop. If you do, your shots will be absorbed until a secret item appears. The secret item of this stage is a Blue Bottle, which is rather valuable considering the high potential to get shot and take damage throughout this stage. Put off collecting it for as long as possible. Don't forget that you can buy another Blue Bottle if you locate the secret shop.
Secret shop 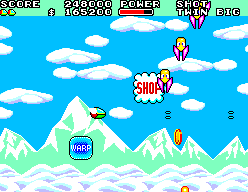 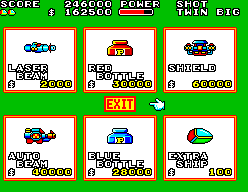 In an unusual twist, the secret shop of this location isn't located near the bottom of the stage. Instead, it is found around the middle of the screen, at the location shown to the left. On top of being able to purchase another Red and Blue Bottle, you can get an Extra Life for the extremely low price of $100. You won't find a bargain like that anywhere else in the game. 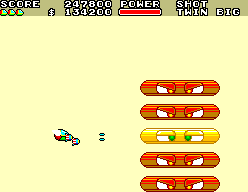 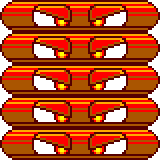 The boss of the sixth stage is called Accordlon. Similar to the second boss, this boss is separated into five horizontal slices. Each slice has to be destroyed independently to defeat the entire boss. Accordlon moves back and forth, with the stack of slices moving up as they approach the center of the screen, and dropping back down when they get close to one side or the other. For the most part, Opa Opa is safe in either of the two upper corners of the screen. However, the longer it takes for you to destroy Accordlon, the faster it gets. If you take too long to defeat it, it will stop moving back and forth and simply move under you and try to crush you.