This may not be the last round in the game, but Sbardian is the last stage where you must destroy bases. The action will be fast and furious, and you'll need to use every skill you've developed in order to survive the ordeal. You are generally safest at the very top of the screen, but even there you have to watch out for the bullets that fill the screen. There are two shops, in case you lost any items when dying. There are no Blue Bottles, so there's no opportunity to fill your energy meter. Proceed with a lot of caution.

The bases in Sbardian are called Ahoyu. They are the strongest bases in the game, requiring 20 regular bombs or 10 big bombs to destroy. Of course, the real problem will be surviving all of the activity taking place around the bases. There won't be many moments of peace, so you'll need to get your shots in on bases whenever you can. If you stick to the top of the screen, you'll want to try and aim your bombs so that they fall on the bases as you are flying above them. 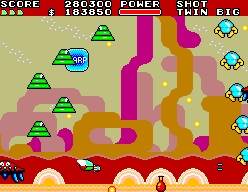 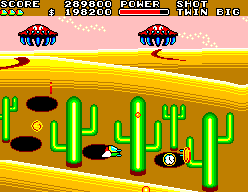 There are no hidden shops on this stage, but there are two hidden items to find. Shoot the ground around the area depicted on the left to find the last Red Bottle in the game. In the desert scene, shoot one of the pits in the ground below a cactus to find a clock which can extend your primary weapon's time limit. 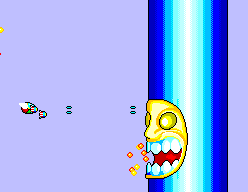 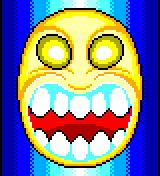 The boss of the seventh stage is called Halorings. It is a face on a pole that spins around. Every time the face is facing to the left, it sprays the screen with bullets. You must guide Opa Opa through any gaps in the bullets, while continuing to fire at the face, who is only vulnerable to your attacks when it shoots. The window of opportunity to hit the boss is fairly small, so you want to make sure that you are firing fairly constantly in order to hit him. This is one boss where you might want to consider using a Heavy Bomb to eliminate the boss in one shot. However, it's actually pretty difficult to both position yourself close enough to the boss to drop the bomb so that it hits, and to time the drop so that it collides when Halorings is vulnerable to attack.