Before you begin this stage (and just before you return to the stage after dying) you are given a chance to spend your hard earn money at a three-screen shop which sells just about every weapon you could ask for, minus the Auto Beam. You can even buy Extra Lives if they're cheap enough to afford. One possibility to consider is buying as many Heavy Bombs as you can afford in an effort to save them up until the very end. They can be used to immediately eliminate every boss but the final boss (it will damage the boss, but not kill it.) The trade-off for this is that you will not be able to use normal bombs until you are out of Heavy Bombs, and you will blow through a lot of money, leaving yourself with very little left over if you die. If you anticipate that you might die, you may want to leave yourself with just enough money to get the Normal Engine, Big Shot, and Twin Big Bombs.

When you're done shopping, you will proceed to a boss rush where you must defeat all of the bosses over again. None of the strategies will change, the bosses are simply stronger with more health, and in some cases more bullets. Refer to each round's boss section to review the strategy that you should employ against each boss.

In a similar fashion to the final boss of Fantasy Zone, you will be faced with a series of challenges consisting of a small creature who crawls around the screen leaving a trail behind. These creatures appear from different corners of the screen, and each phase has a different pattern.

Phase 1
The creature starts out in the lower right corner, and crawls slowly in a clockwise direction, moving slowly inward as it proceeds. It is easiest to attack when it is travelling horizontally.
Phase 2
The creature starts out in the lower left corner, climbs up half way up the screen, and then cuts across to the right, splitting the screen in half. It then proceeds to travel as far as it has to until it reaches you, and then drives towards you. It's not too fast, but you have to position yourself carefully in order to give yourself the maximum opportunity to attack the creatures.
Phase 3
The creature comes down from the upper left corner, moving very quickly, and alternates between rising and falling as it fills the screen from left to right. Stay on the right side of the screen, and shoot around the middle of the screen until the creature is defeated.
Phase 4
The creature moves extremely quickly, starting in the upper right corner, and changes directions to approach you as directly as possible. There is a greater chance that it will trap itself and die than the chance that you shoot it and destroy it unless you are very careful and very persistent. 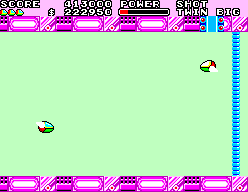 After destroying the fourth creature, the true boss appears. Resembling a clone of Opa Opa with a different colored windshield, it drops down into the arena from the upper left. It then proceeds to attack you with the same weapons as Opa Opa. It has its own health meter at the top of the screen below yours. It will not necessarily hold still if you get too close, but there are ways to trap it so that you aren't forced to dodge it's attacks. If you approach it and sit just close enough to the boss (about a ship's length away), the boss will drop to the bottom of the screen and stay there. Then you can bomb it until it is defeated. Otherwise, you will have to outwit it, lure it into your attacks, and dodge all of its firepower. If you deplete its health meter before it can deplete yours, you will be presented with the ending of the game, and learn the mystery behind the story. Congratulations.