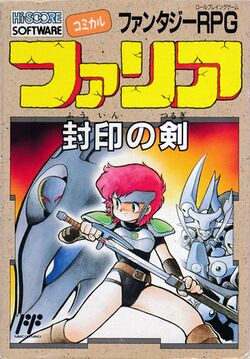 In Faria, the player controls a sword-wielding hero, with a number of similarities to The Legend of Zelda. As with many RPGs, the game is broken into towns, an overworld, and dungeons. Activities in town include talking to non-player characters to gather information and items, traversing the overworld involves combat that takes place on a separate battle screen, while dungeons consist of combat in the same window used to navigate and puzzling through increasingly complex mazes. Combat consists of moving the player character's sprite around the screen while swinging its equipped sword or using a handful of items including bombs and a bow & arrows.

Faria was one of Game Arts' first RPGs, which the company would later become famous for through series such as Grandia and Lunar. The game was an early project for Takeshi Miyaj, Yoshito Asari, designer for the Lunar games and director of the first two Grandia games, and Akihiko Yoshida, designer and illustrator on the first two Ogre Battle games and several Squaresoft titles.