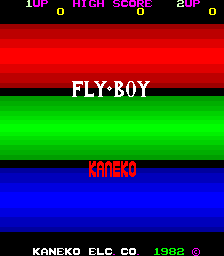 Fly-Boy is an arcade game that was released by Kaneko in 1982; it utilizes two Zilog Z80 processors (running at 3.072 and 1.536 MHz), with two General Instrument AY-3-8910s running at 1.536 MHz for sound. It was later licensed to Atari, for American manufacture and distribution, under the title of Fast Freddie - and the player must use an 8-way joystick to take controls for the eponymous "Fly-Boy" (or "Freddie" in the US version), with a single button to make his glider dive (or "kick", in the US version). Not only does the player have to help Fly-Boy negotiate invisible air currents, the wind, and draughts, but he also has to avoid crashing into any of the terrain below him which includes the Sphinx and Taj Mahal for the levels based in Egypt and India; he can also come down on, or "kick" in the US version, flying objects, for points (planes and balloons are worth 30 points, while box kites, helicopters, ducks, seagulls and lifeboats are worth 50 points and flags, the lettering of which spells "BONUS", are worth 100 points). Fly-Boy's progress is indicated by a bar adjacent to the word "MAP", or "KICK" in the US version in the bottom-right corner - and he has to land upon a pad at the end of each level to finish it.