Hon-Fu(ホンフゥ) is a Hong Kong based Cop who uses a nunchaku as his primary weapon. He is a good friend of Tae Kwon Do master Kim Kaphwan and the kickboxer Franco Bash. Both have helped each other in bringing various criminals to justice. 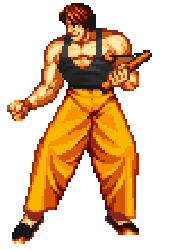 In Fatal Fury 3, Hon-Fu receives some secret information from one of his informants, Cheng Sinzan. Due to the knowledge gained, he comes to Southtown looking for the famous criminal Ryuji Yamazaki, who had been hired by the Jin twins (Chonrei and Chonshu). They are trying to gain control over the Scrolls of Immortality, which are supposed to grant enourmes powers.

Though Hon has no personal interest in the scrolls or the powers they posess, he wants to bring the criminals involved to justice. Hon-Fu's story continues in his Real Bout profile.