Toji Sakata (坂田 冬次) is a small, old man who is the master of Dainan-ryū Aiki-jūjutsu. He was once a rival to Tatsumi Suō, Blue Mary's grandfather. 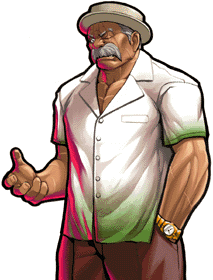 A prime martial artist in his youth, Toji now spends the remainder of his life strolling down the streets of Southtown without a care in the world. Once a jolly and high spirited fighter who had earned a name for himself in the world of fighting with his solid and refined Aikido style, which allowed him to deliver several powerful blows in just a few seconds, Toji is now nothing more than a forgotten old man who is terribly resentful towards the society that once worshipped and admired his feats.

Toji just passes most of his time wandering around the crime infested streets of Southtown. Any thug foolish enough to try and mug him would suffer terrible consecuences, and probably end up in a hospital for their insolence. However, ever since the appearance of Geese Howard in the fighting scene, Toji's interest has been somewhat moved. It seemed that the challenge of the crime lord had once again reactivated the dormant fighting spirit within him. Toji was fully aware of Geese's legendary Hakkyokuseiken style, since he had faced Tung Fu Rue, Geese's master, several times in the past. Inspired by the new batch of fighters that have appeared to challenge Geese, Toji just might yet revive his old fighting flame, and teach the new generation a thing or two about true battle experience.