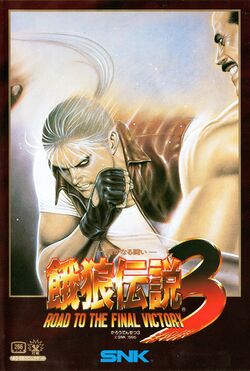 Fatal Fury 3: Road to the Final Victory chronicles the story of Ryuji Yamazaki and the Jin brothers (Chonshu and Chonrei) and their attempt to gain control of the 3 sacred Hidensho scrolls, which are supposed to grant immortality.

It features 5 characters returning from previous Fatal Fury games and 5 new characters plus 3 boss characters. One of the returning characters is Geese Howard, who has survived his canonical death in Fatal Fury.

At the end of each round, the player is given a grade (from E to A and S) based on their performance. If the player manage to maintain a high average, then they will face against Ryuji again in a full match and then against Chonshu and Chonrei in that order.

Fatal Fury 3 is the only canonical Fatal Fury game that does not feature a King of Fighters tournament.

Garou: Mark of the Wolves