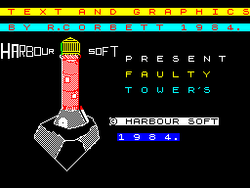 Faulty Towers is a text adventure game which had been released by Harbour Soft on the Sinclair ZX Spectrum and Commodore 64 in 1984; it is a spoof of the BBC television series Fawlty Towers, which aired on BBC2 from 1975 to 1979. The player must take on the role of the hotel manager Basil Faulty (apart from one letter in his surname, the character names remain unchanged) and help him keep his hotel open for a week, while various characters try to close him down, by showing up and demanding service at odd intervals - however, Faulty is expecting the arrival of a Public Health Inspector and it is essential that he has to dispose of anything to which he might find an objection. Faulty can also get a bonus by insulting his wife Sybil and hitting his Spanish butler Manuel, but Sybil and some others will occasionally give him requests; he'll have to complete these tasks within a specific number of moves (which varies depending on the task), but he will not know in advance how long he has to do so (and if he fails, he will lose his sanity and get taken away to a mental hospital, and the game will be over).