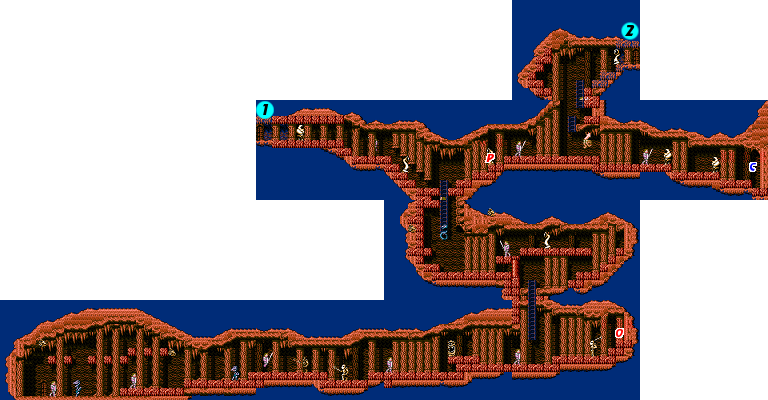 Finally out of the mist! You are now so high up in the tree that you are literally in its branches. Still, being such a huge tree to begin with, the branches are also quite large. They are also broken up into different segments. There is no tower to visit here, but you have will have to be thorough and explore the various pathways that are available to you in order to find some equipment that will be vital to the success of your mission.

You begin in the bottom left corner of the map above. You must proceed to the right. As you do, you will encounter enemies that you should be familiar with, until you reach the screen containing a lone enemy known as a Tamazutsu. Despite the ferocious appearance of its face, the only thing this enemy can do is continuously rise out of the ground. It can't move or attack you in any other way, and serves as a very simple obstacle. When you reach the room with the ladder leading up, attack the single Mask Man in the room. There is a 25% chance that Ointment will appear when you defeat it. However, the Ointment will be hidden behind the far right column. You'll have to step behind it in order to check if it's there.

Climb up the ladder and defeat the Lamprey for bread. In the next screen, you will see two Yuinarus flying around while a Necron Aides hovers in front of the ladder. If you have Ointment, you can climb right past it. Otherwise, poke it off the ladder with your sword before you ascend to the next screen. There, you will find two Lampreys along with a vial of poison that is impossible to avoid touching. From here, you can go left or right, but for now, head to the right. Fight the Yareeka for more bread, but ignore the ladders that lead above. Continue right and defeat the Charrons in the next room. You will arrive at the entrance to Conflate.

Conflate is a town positioned on the edge of one branch. You can come and go from the left side of town, but the right side is a dead end. The left side of town is packed with buildings, including a Meat Shop which sells restoration at a reasonable price compared to the outrageously expensive hospital on the other side of the Cathedral. The Cathedral apparently has a guard posted outside, but he is of little consequence. Head inside for a mantra or to increase your rank if you are due.

The right side of town is desolate by comparison, with only two buildings. The first building is a shop, where you can purchase the incredibly valuable Giant Blade to increase dramatically your offensive power. And if you haven't purchased the Magic Shield yet, do so here as well. You should not need the Wing Boots, but stocking up on Red Potions never hurts. Patrons of the bar simply speak of better times in the past. One notable omission in this town is a key shop. This means if you don't have a Key K to open the door that leads to the next section of the branches, you must return all the way to Victim in order to purchase more keys. 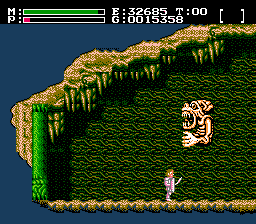 The scenery around you will turn green. Between the two Yuinarus flying around the entrance, and the Lamprey, you should have no problem refueling your health before you go on. The next screen has two Grimlocks running about on the top platforms. If you defeat them both, there is a 25% chance that a Glove will appear behind the right most column on the right platform. Try to collect one before moving on to the left screen. Once there, you will encounter a Zoradohna boss (3). You must defeat it in order to collect the prize that it's hiding: the Battle Helm. Even though you collect the Helm, you may not equip it until you also have the Battle Suit and the Dragon Slayer sword. For now, you will merely collect the helm.

Head back out from the green branch to the main area. Pass the two Lampreys again, but when you reach the Yareeka, explore the region above the ladders this time. A single Lamprey guards the entrance (2) to the next section of branches. You'll need another Key K to open the door and explore inside.

You'll be greeted by a lone Grimlock. Defeat it and continue to the right. In the next screen, you will encounter two Giant Striders. If you defeat them both, there is a 25% chance that Ointment will appear. You should attempt to grab one before you continue. The next screen to the right has a gap in the floor. Not only is it safe to fall through it, it's somewhat recommended. If you jump over the gap, you will continue to a door that leads to (4) and then you will have to drop down and use another Key K to open door below. If you drop down through the gap, you can explore that region immediately.

You'll need to walk along the top of the branch, where you must be careful to avoid the Poison vial lying around. When you reach a break in the branch, you can drop down and explore inside. In the screen where you drop down, there is a 25% chance that a Mattock will appear if you defeat both Giant Striders, but it's difficult to collect once you drop down without using Wing Boots. If you wander back to the left, you will eventually encounter a Rokusutahn boss which guards an Hour Glass, but it's not recommended that you pursue it. Instead, exit through the door to the right, and you'll appear by the lower door (5) in the next map. Whether you arrived from the upper path (4) or the lower path (5), you'll need to explore the lower right portion of the branch next. In the section one screen right of the upper path entrance, drop down through the floor to the screen below. Continue heading right until you reach a room with three platforms covered with columns that obscure you view of what's behind. From this room, you can head right or up. Whichever way you choose first is up to you. 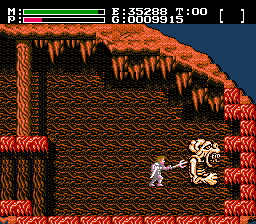 If you head to the right, you will encounter another Zoradohna boss (6). Defeat this one just as you did the last one, and you will obtain the Battle Suit as the reward. Although you may be itching to equip the Battle Suit and Helm, you will not be able to until you collect the Dragon Slayer sword. Return to the previous room, watch out for the two Grimlocks hidden behind the columns, and this time, make your way up the ladders. In the screen above, you will find a special item guarded by a single Zozura (7). The item is a Magical Rod which will increase the strength of your magic.

Now you are ready to head further up the branches. Climbing up will be a little difficult because of one enemy. When you climb up the ladder to the level above, a Wolf Man will rush to greet you. Any attempt to leave the ladder will result in the Wolf Man stabbing you and knocking you back down. There is only one way to safely pass the Wolf Man. You must slowly tap

on the ladder until you reach the point where the player is standing on the ladder facing the Wolf Man, instead of engaging the ladder. From this position, you can swing your sword and hit the Wolf Man until he is defeated. Then you can continue to climb up the ladders to the screen above.

On the level above, even you you climb up the ladder, you will be unable to jump across the gap in the high platforms in the next screen. However, it is a safe way to pass above the two Wolf Men who run around below. If you really want to get up to the right side of the high platform, you must use Wing Boots. Exploring the area to the right will earn you Gloves, but they're not particularly helpful here. Down below, do not climb down the ladder unless you with to fight the Zozura guarding a vial of poison. Instead, climb up to the level above.

In the next room, you will find a Giant Strider and a Mag Man. If you defeat both of them, there is a 25% chance that Wing Boots will appear. It's is not required, but highly recommended that you make sure you have at least one pair of Wing Boots in your inventory if you'd like to make the last fight of the game incredibly easy. Collect the Wing Boots here unless you already have a pair in your inventory. Then use the ladders to climb up and around to the high platform. Then watch out for the Wolf Man, climb down and fight the Giant Strider, and you will reach Daybreak.

Daybreak is not the last town you will visit, but it is the last town in branches. You'll find a useful item in the shop, the powerful Tilte spell. It is incredibly expensive, but this is your only chance to buy it. On the way to Daybreak there is a screen with two Wolf Men and a Magman: by repeatedly killing these enemies you can very quickly reach the required amount. You will learn some information here as well; the Guru in Conflate has the Ring of Dwarf. That's an item you're going to need in order to proceed to the Castle of Dartmoor.

As a result, you're going to need to pick up two more King Keys in order to open the doors separating Conflate and Daybreak. If you have collected the Magical Rod, purchase the keys, then you should turn around and make your way back to Conflate in order to visit the Guru. The Guru will not give you the Ring of Dwarf unless you have collected the Battle Suit and the Battle Helmet first.

Once you have traveled to Conflate, collected the ring, and returned to Daybreak, you are ready to visit the last branch that leads to Dartmoor. Exit Daybreak through the right side.

The end of the journey is approaching. There is still only one other town ahead. The good news is that from now on, keys will no longer be needed to proceed. The bad news is that the enemies encountered will be more powerful, while those who drop bread will be rare. The path to Dartmoor is surprisingly simple. You must walk to the right through four screens until you reach the door at the end (8). The Lamprey at the end is a good source of bread to restore your health before you move on to the castle. When you are ready, stand in front of the door and push

. If you have the Ring of Dwarf, the door will open for you.