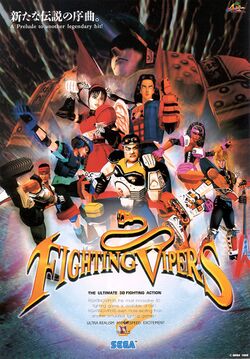 Fighting Vipers (ファイティングバイパーズ, Faitingu Baipāzu?) is a 3D fighting game developed by Sega AM2. The game was first released in the arcade in 1995 using the Sega Model 2 hardware and ported the same year to the Sega Saturn with significantly reduced graphics. In 2005 the game was ported for PlayStation 2 as part of the Sega Ages 2500 line. In 2012, digital ports of the game was released on PlayStation 3 and Xbox 360.

The Sega Saturn version offers extra modes. Versus, Team Battle, Training modes and Playback mode. Training mode has an option to turn on Command Training. Playback mode lets you watch a match from Arcade or VS mode. Hold L or R on the Saturn pad to save the match. You can choose to auto-save replays from the Options menu. You can also watch exhibition matches with two CPUs.

button, you can choose to play 3 versions of the game:

The Sega Ages version on PS2 sadly has none of the Saturn extras.

The 2012 digital rerelease on Xbox Live Arcade and the PlayStation 3's PSN is a perfectly emulated version of the arcade original. Some Saturn extras are still not present but it includes online play along with Ranking mode and Random mode which were possible to access in the arcade version.

Hyper-adrenal combatants in full-body armour, battling night and day in back-alley rings - only such young gurba warriors have earned the right to be called VIPERS... Now in Armstone City, the mayor has formally announced a fighting tournament on a grand scale, with the final bout to be held atop the staggering City Tower in the centre of town. With City Tower as their ultimate goal, eight young VIPERS start down the path to victory, a path which only one will see the end...