The gameplay shares many similarities to its sister-series, Virtua Fighter, in terms of basic gameplay. As Virtua Fighter focuses more on realism, Fighting Vipers is more over-the-top in terms of character designs and the way combos are performed in comparison.

Just like Virtua Fighter, your main buttons are Guard

. Although, despite being a 3d fighting game, there are no sidesteps. Grabs can be performed with

alone which pushes the opponent in another direction toward a wall.

Unlike Virtua Fighter at the time, Fighting Vipers includes walls via cages for every stage which can be used to throw opponents towards and create devastating combos with. 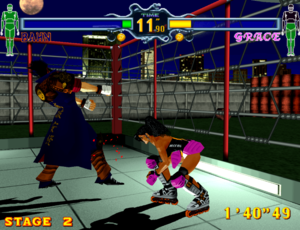 Next to the health is the Armor gauge displayed as a green body. Armor is split from the top half to the bottom half. With enough hits, the armor will break making the character weaker to attacks (blocking attacks gives you chip damage). When the armor gets weaker, the green body flashes. As it breaks, the body flashes red. However, having your armor broken gives you a small burst of speed and power. All characters are able to break their entire armor with a shared quick special input. Warning: The armor stays broken for the rest of the match.

While floating in the air from an opponent's attack, pressing the Punch, Kick and Guard button simultaneously performs an air recovery.

Fighting Vipers 2 doesn't see too many changes from its predecessor on the surface. Just like the first game, there are no side-steps to its movement at least not by default. Some movement like jumping is a bit faster than the last game and just feel smoother overall. Damage overall isn't as high as the first game thus changing the pacing of the game a bit. Air recoveries were extended as well. Three new characters are added to the default roster with 3 more to unlock in the Arcade and Dreamcast version. 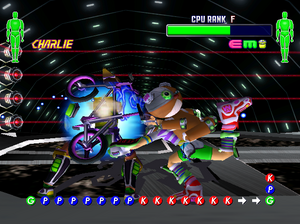 One of the new mechanics added to Fighting Vipers 2 are Tech Guards. These are special guards that interrupt an opponent's combo when timed right. These are performed by pressing the 3 main buttons (

) simultaneously. There's a High and Low Tech Guard. Once a hit makes contact, you can either counterattack immediately (with

) or evade to the side for a side throw for example.

Tech Rolls were also introduced. When falling from being hit, you press

Throw Escapes have seen some enhancements as well. Throw escapes aren't too dissimilar to Virtua Fighter 3 (and later 4) where you input a certain direction then

depending on what throw the opponent might use. Another means of Throw Escape is 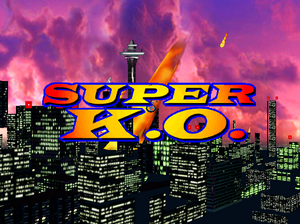 Another new mechanic are Super K.O's. These desperation moves are performed by the player having their armor broken and doing a special input.

Unlike supers in other fighting games, if used to finish a round, the user will be rewarded by winning 2 round wins. However, they can only be used once throughout the entire match. Even when it gets countered for any reason, it'll be gone for the rest of the match. Faster way to have access to them is to use the armor removal.

Super K.O's can be disabled in the options menu in the Dreamcast port. 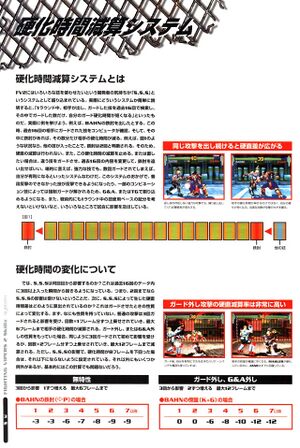 A secret mechanic not mentioned except the japanese guide for the arcade version, Fighting Vipers 2 Skillz (ファイティングバイパーズ2 Skillz) published by Axela, is the Stun Subtraction System.

This system keeps track of how many times you use a move at least 16 times on a blocking opponent and decreases the blockstun to force players to add variety to their pressure game (Guard & Attack moves included).

As described in a Shoryuken.com article by Jason Moses uncovering the mechanic, ... let’s take Bahn’s Iron Elbow (6P) as an example, as seen above in the left diagram. It’s -3 on block normally, and remains -3 the second time you use it within the 16 move window. As soon as you use it three times, however, SSS kicks in and subtracts three frames from the opponent’s blockstun, making the move -6. Use it four times, and it becomes -7, five times and it’s -8, six times and it’s -9. SSS can’t subtract more than six frames, though, so even if you used the move 16 times in a row it would never become worse than -9 on block.