This is the second map in the TNT: Evilution series. 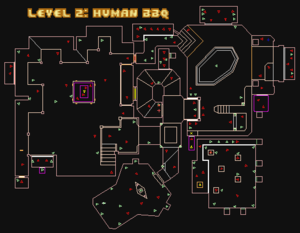 Map of the floor

To complete the level, the following tasks must be performed:

At the start of the map, you should see four imps and a former sergeant observing a bonfire. Deal with them, and use the door between the two green torches to continue.

Head straight down the corridor, watching for chaingunners or attackers as you pass the side corridors and window. As you loop around the end of the corridor, you can collect the red keycard. This will also open a nearby door containing a chainsaw and and spectres.

With the red key, head out into the courtyard and open the red door to the north. Follow the corrodior to the next room, defeating the enemies as necessary. In this room, the back wall will open to reveal imps and other enemies once you step onto the green terrain. If you shoot at the imps but miss, demons will attack from behind.

You will need to get up the stairs, but they are too high. Flip a switch behind the stairs; this opens the window above and also opens the northern wall to reveal cacodemons and a pain elemental. After dealing with them, head back to the alcove overlooking the stairs, and jump from the window. Collect the yellow key.

With the yellow key in hand, you can head to the exit. The yellow door is located near where you collected the red key. However, additional enemies will also appear as you progress through the outer platform.

The four secrets are marked in purple on the map:

Behind the blue key door is an area where you can collect a supercharge. When you pick it up, the walls will lift to reveal monsters, a set of teleporters, and a weapon. The weapon is a chaingun on easy, and a super-shotgun otherwise. To reach it, flip the middle switch found in the corner. All other switches open a teleporter that can telefrag monsters on the other teleport destinations.

This map has one notable feature: The BFG and megasphere are in close proximity and can give a significant advantage. However, he will be forced to go through the red door, and can be intercepted as necessary.