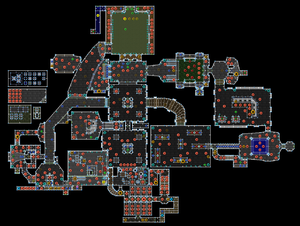 The entrance area is filled with barrels, and is surrounded by solders within the nearby walls. Ignore them as well as the switch visible in front of you. Instead, move backward to reach the shotgun, and shoot the shotgun guy behind the door. Open it, and start attacking and clearing out the side room from the corridor. For best effect, try exploiting the friendly fire that occurs.

Flip the switch to open the next corridor. Note that the shotgun troopers behind the window are exactly that - behind the window. You can't target or attack them. You can try opening the grate to the left and snipe at some monsters (but watch your back as there will be enemies approaching.)

At the end of the right corridor, you should see a switch. Walking into that switch opens a door behind you (and a side door in the switch area that has a shotgun guy). Head into the room to the east for the Super Shotgun. If you cross the room to the left (across the light beam), reinforcements will arrive behind you.

The switch there opens up a door in the corridor in front of the window. This is a lift down to another control room. Flip the switches two switches there. If you want, you can grab the medikit, otherwise, return to the crate room to the south. One of the crates should not be accessible, and you can take a lift to the switch to build stairs to the red key.

Head into the western area, just south of the solid window. With the red key, flip the switch to gain access to the blocked staggered door. Flip the red key switch and go back to the barred door on the first corridor, and turn south through the red-key door (opened via switch).

Destroy the mosters, but look for a berserk powerup ifyou are low on health; it's behind the blue key card crate. To advance, look for a corridor from the south of the room, and go through the doors. Once you see a backpack, prepare for an ambush: Grab it, quickly turn left and advance through the monsters (destroying or running), and grab the blue key.

Head north, and return to the northern room. Look for a switch on the northern pillar, and use it to open the piller. Use the switch behind the sargent, and turn around to the opened area. Head there, and take a right.

In the room past the first door unlocked by the first red switch, use one of the terminals in the right-side of the southern wall. It leads to a medikit.