Final Fantasy is described as one of the seminal games of the electronic Role-Playing (RPG) genre, but the seeds for the genre were sown many years before. Tabletop RPGs, which entail cooperative improvisational storytelling done within complex systems of rules, grew out of the timeless practice of "wargaming" and were a prominent part of youth subculture during the 1970's. Gary Gygax is widely credited with the development of the first tabletop RPG, Dungeons and Dragons, released in 1974, but the ideas for this grew out of the dice-rolling of a clique of wargamers (including Dave Arneson, one of the "unsung heroes" of RPG history) at the University of Minnesota, as well as the gaming conference "GenCon". (Given the roots of RPGs in wargaming, it isn't surprising that, in almost all RPGs, the player characters are warriors, and the combat system is often the most sophisticated part of the game.)

Since the same individuals who flocked to D&D also tended to be the same individuals that pursued interests in the then-fledgling field of personal computing, there would inevitably be attempts to translate D&D-style rules systems into computer programs. This alleviates the sometimes tedious calculations involved in playing RPGs, and potentially allows a single player to engage the computer as a (albeit non-intelligent) Game Master. The first widely recognized development of a computer-based RPG occurred in 1980, when a Texas teenager named Richard "Lord British" Garriott, who had developed fantasy-based computer games as a hobby for several years, arranged for a local computer store to distribute his game Akalabeth for the Apple II. MUDs (Multiple-User Dungeons) had existed for several years before that thanks to the availability of modems, and terminal-based games such as dnd (1974) had a strong following at universities. Also, Rogue, a text-based "dungeon crawl" game that has to date spawned many derivatives, also appeared on Unix machines in 1980. Akalabeth was, unlike the others, graphical (though crudely so) and therefore of singular influence on modern games. (It was also more than successful enough to put Garriott through college.) Garriott would go on to create a more sophisticated game, Ultima (1981), which included an action element (players had to obtain a spaceship and shoot down enemy ships), but was still an RPG at heart, as players built up their (single) character, uncovered clues and solved puzzles, and proceeded to the game's final confrontation with the evil wizard Mondain. Also in 1981, three Cornell University students had their dungeon crawl game, Wizardry, published. Wizardry featured first-person graphics as opposed to Ultima's bird's-eye view, and allowed players to control six player characters (PCs).

Both Ultima and Wizardry were highly successful and have spawned numerous sequels and spinoffs (such as The Bard's Tale and Might and Magic. Many of these early games are completely unplayable to modern gamers, featuring plenty of plot inconsistencies, in-jokes (pop culture references abound in Ultima II), irreverence, and shallow game design. But in their time, they were hugely successful. Ultima established itself as the dominant RPG series in North America, with Richard Garriott (by this point referred to almost exclusively by his nickname of Lord British) creating his own company, Origin, to publish the third game in the Ultima series in 1983. However, it was Wizardry that would cross the Pacific Ocean and establish itself as the dominant RPG series in Japan. In Japan, Wizardry has spawned an anime and numerous spinoffs and sequels that have not been released in North America. 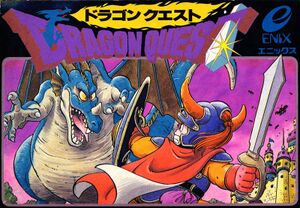 Meanwhile, the Famicom, which would later make its way to North America in the form of the Nintendo Entertainment System, was enjoying high sales figures and being established as a very lucrative market. Being that the Japanese had taken the lead in the revival of the video game console industry, and given the popularity of Wizardry, it was only a matter of time before a uniquely Japanese, console-based RPG would be released. This came in the form of Dragon Quest, released in 1986 by Enix. Created by game design visionary Yuji Horii on a MSX computer and featuring artwork by Dragon Ball artist Akira Toriyama, Dragon Quest was so successful that, by Japanese law, new installments in the series can only be released on a Sunday to reduce truancy. Like the Ultima and Wizardry games of earlier years, Dragon Quest is prohibitively crude to modern gamers, but its popularity at the time made the video game industry take notice.

And that's where the story of Final Fantasy begins. 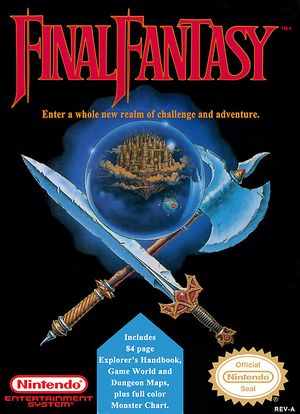 Final Fantasy for the NES

Square began in 1983, a division of the Denyuusha software company. Their Famicom game development efforts began in 1985 with an undistinguished shooter called Thexder, and in 1986 a game called King's Knight was released. A confusing mix of platform action and RPG, King's Knight's poor sense of game controls destined it for failure. With this lack of success on the Famicom and dwindling finances, Square began to get desperate. They began experimenting with packing 3-D glasses with their games. This can be seen in 3-D WorldRunner, a fiendishly difficult and innovative action game, and Rad Racer, a well-done racing game. Square still faced the prospect of going out of business, and Hironobu Sakaguchi, director of Planning and Development, was faced with one last chance to save the company. Square had experimented with Wizardry-style RPGs before on the Famicom Disk System, and the success of Dragon Quest made the prospect of developing a fantasy RPG game quite appealing. Sakaguchi decided that the (possibly) final project of Square would be a fantasy game, which is the source of the Final Fantasy name (and, presumably, the inherent contradiction in a game with "Final" in the title having numerous sequels). To make a long story short, Final Fantasy was more commercially successful than Sakaguchi predicted.

The original Final Fantasy game would make its way to North America three years later, when Nintendo picked the game up and began marketing it very aggressively. At the time, American NES fans had few RPG options; the first NES RPG was a very poorly done port of Ultima III, followed shortly by the behind-the-times Dragon Quest (released as Dragon Warrior). Outdated at the time it was released, Dragon Warrior was made moderately successful but not a hit, and Nintendo was reduced to giving away copies of the game to sell subscriptions to its magazine, Nintendo Power. Enix came to America to release Dragon Warrior II, but were forced to censor portions of its storyline (due to religious allusions) by Nintendo, and, with a relatively limited marketing campaign, failed to generate significant interest. For the NES, Final Fantasy was the first RPG that was both marketed well and had sufficient depth to capture players' imaginations, leading to it being far and away the most successful RPG in the console's history.

Given this, it is often argued that Final Fantasy has been a more influential RPG series than Dragon Quest. While Dragon Quest has stuck mainly to its Dragon Ball roots in terms of aesthetics, Final Fantasy has shown more eclecticism, which has been reflected in its numerous descendants. The battle system, gameplay mechanics, and plot devices have been copied endlessly. Final Fantasy's most direct ancestor is most likely Ultima III; both broke new ground in allowing players to control multiple PCs and both are relatively nonlinear. Final Fantasy, however, improved on Ultima III by offering a more streamlined battle system and a greater sense of structured questing. Final Fantasy has its weaknesses; the appearance of the Light Warriors to open the game is very poorly explained, there are a few annoying "fetch quests", the game is poorly paced (players spend much more time fighting in repetitive random battles than exploring and developing strategies), and has its share of bugs and game design shortcomings (there are supposed to be special weapons that have increased effects on different monsters, but this was not actually implemented). However, at the time these kinds of issues appeared in almost all other RPGs. Moreover, Final Fantasy is different from most other console RPGs in its relative nonlinearity; while most players would defeat Lich first, then Kary (now called Marilith), before obtaining the airship and undergoing transformation, there is no reason why players could not also obtain the airship first and take on Kraken or Tiamat directly afterwards.

Final Fantasy's influence continued, as it has continued into today. When bringing its Romancing SaGa series to the US, Square opted to market it under the name Final Fantasy Legend. The first successful RPG for the American Super NES was Final Fantasy IV (released as II), and Final Fantasy VI (released as III in North America) remains the favorite game of numerous RPGers. Square has re-released the original game multiple times, described below.

Final Fantasy has been remade several times for different platforms, and has frequently been packaged with Final Fantasy II in various collections. While all of these remakes retain the same basic story and battle mechanics, various tweaks have been made in different areas, including graphics, sound, and specific game elements.