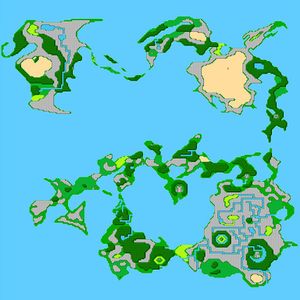 Cornelia is a small town protected by a castle, and ruled by a king, queen, and princess. It is located on a peninsula that juts into the Inner Sea in the middle of the Southern Continent. It is cut off from the mainland of the continent by mountains and the Northern Strait. A bridge used to connect the peninsula to the mainland, but it fell into disrepair and was useless until repaired as a reward for the Light Warriors. Cornelia is west of Pravoka.

Pravoka is a port city east of Cornelia. It is much larger and the shops sell a much greater variety of items, magics, and equipment. As the only major port city in the world, it is inhabited both by residents and various sea farers, including a gang of pirates.

Located in a mountain a ways north of the Cornelian bridge and far west of Pravoka, its sole resident is the blind witch Matoya. Despite her blindness, she was able to see perfectly due to her crystal ball, until recently when it was stolen.

Called "Elfland" in the NES version.

A large town and castle across the Inner Sea from Cornelia, Elfheim can be reached by sailing due south from Cornelia to its norther port, and then walking to the southern coast. Elfheim sells the most powerful equipment and spells that can be obtained until you leave the Inner Sea. The prince of Elfheim has been put into a coma by the Dark Elf, Astos, and can only be awoken with a magic potion.

Called the "Dwarf Cave" in the NES version.

The home of the Dwarves, Mt. Duegar can be reach by the northern most port on the Inner Sea, located northwest of Cornelia. From there, walk south and west until you see the mountain entrance. Mt. Duergar has no shops, but a fair amount of treasure. The Dwarves are attempting to build a canal that would allow ships passage out of the Inner Sea and access to the rest of the world.

West of Mt. Duegar is the dying city of Melmond, plagued by the rotting coming from the nearby Terra Cave. Despite the problems the shops are all up and running, and some fairly powerful equipment and spells can be purchased here. The world-renowned linguist, Dr. Unne, lives here.

Walkthrough page: The Crystal of Earth

Located on the peninsula only accessible by the Titan's Cave, this is the home of the great sage, Sarda.

Crescent Lake is a town located on the eastern side of the Southern Continent, and is accessible by sailing to the southern port on the eastern shores and walking south along the mountains until you see the lake the town gets its name from. Aside from having the most powerful equipment and spells available until you get an airship, Crescent Lake is host to the Circle of Sages.

A chain of islands in the northern hemisphere, located due north of Cornelia and only accessible by airship. The islands are home to the dragons, including the King of Dragons, Bahamut, who rewards those who bring him proof of their courage.

Gaia is a small, mountainous town completely cut off from the rest of the world. It is only accessible by airship, and can be found in the northeast area of the eastern continent. The sells many of the most powerful weapons, armor, and spells in the world, and is a place to visit as soon as possible.

A town on the western island in the Northern hemisphere, Onrac can be reached by landing on a small field of grass to the west, and then walking around the mountain, canoing across the river, and the walking through the forest. Onrac sells powerful magics and is located above the Sunken Shrine.

Walkthrough page: The Crystal of Water

A lone trader who sells his wares in the desert west of Onrac. The caravan cannot be seen from the world map, but to reach it walk north through the large desert and into the very middle of the smaller desert. The trader has recently acquired a very rare and valuable item.

Called "Lefian" in the NES version.

Home of a highly advanced civilization that built the Tower of Mirage and Flying Fortress, Lufenia is very difficult to reach. To get there, land on a small square of grass south of Gaia and walk quite a ways through swamp and forest until you see the city. There you can buy two of the most useful spells in the game as well and find out how to get to the Flying Fortress. Unfortunately, the Lufenians don't speak English.

Called the "Temple of Fiends" in the NES version.

A ruined temple located northwest of Cornelia, the Temple of Chaos has become the hideout of the dark knight, Garland, as well as a bunch of bats.

A dangerous cave that can only be reached by a difficult journey, the Marsh Cave is located on the south western coast of the Elf kingdom. It can be reached by walking west of Elfheim, past the mountains, north and then south around the souther mountain range, and then by following the coast to the south. The cave is very dangerous, home to many poisonous creatures and the undead. It does, however, also contain vast stores of valuable treasure.

Called the "Northwest Castle" in the NES version.

A destroyed castle that is now home to a lone king who wants his crown back. The crown was taken to the Marsh Cave, and once returned you'll find that there is more to the crown and king than meets the eye. The Keep is located north and west of Elfheim and can be reached by following a similar path to the Marsh Cave, but turning north instead of south.

Called the "Titan's Tunnel" in the NES version.

A small tunnel that connects the Sage's Cave to the rest of the Melmond area, the tunnel is guarded by a very large titan who demands rubies before he'll let you through. The cave is located west of Melmond.

Called the "Earth Cave" in the NES version.

The source of the rotting earth which is consuming Melmond is the Terra Cave, located on a triangular peninsula south of Melmond. The Cave is home to a vampire as well as something far more sinister. A vast army of the undead, giants, demons, and other creatures patrol the five floors.

The volcano, which is home to the Fiend of Fire, can be reach by following the river the connects to the Crescent Lake west through the mountains.

Called the "Ice Cave" in the NES version.

A frozen cave in the mountains that surround Crescent Lake. The Cave is home to two things: some of the most dangerous creatures on the continent and a lot of valuable treasure for anyone brave enough to claim it. The cave is only accessible by canoing up the network of rivers, starting at the mouth of the river north of Crescent Lake.

Called the "Castle of Ordeals" in the NES version.

A ruined castle in the northwest region of the eastern continent, the Citadel is only accessible by Canoe. Head south to get to the Citadel.

A cave hidden behind the waterfall on the river near Onrac, the cave has both valuable treasure and a piece of highly advanced technology.

Located beneath Onrac, the Shrine is home to the mermaids, however it has been taken over by the Kraken, Fiend of Water. The Shrine is only accessible to people who can breath underwater by using Oxyale.

Called the "Mirage Tower" in the NES version.

A Lufenian tower located in the middle of the great desert on the northern continent. The tower connects to the Flying Fortress, but only those with the Bell can enter it.

Called the "Sky Castle" in the NES version.

The former home of the Lufenians before it was taken over by the Fiend of Air, the Fortress floats high above the planet. The tower is accessible by the Tower of Mirage, but only if you have the Warp Stone.

Called the "Temple of Fiends" in the NES version.

The Inner sea refers to a vast body of water surrounded by Cornelia and Pravoka to the north, the Dwarf and Elf lands to the south and west, and the mountains to the east. The water is currently cut off from the oceans of the world, though the Dwarves are building a canal to connect the Inner Sea to the rest of the world.

Called the "Ryukahn Desert" in the NES version.

A small desert located south of Crescent Lake. Legends say that an ancient race buried one of their technological marvels here.