When you return to Altair, a man is posted by the entrance to inform you that the rebellion has been moved to a camp not far from Fynn. They are posed to strike and take back the castle from the empire. Head north from Altair, to the location just beyond the bridge which is directly south of the lake surrounding Fynn.

When you arrive, speak to Princess Hilda and Prince Gordon. Princess Hilda will express her gratitude for all that you've done and for rescuing her. And she will confirm that she is in fact the true Princess. Gordon will be very straight with you and assign you the role of infiltrating the castle as the heart of the rebellion.

Travel across the lake and enter Castle Fynn. Shortly before you reach the first set of stairs, Leila will be waiting for you, and she will join your party. You may notice that Fynn is eerily absent many of the guards that you might have assumed would be crawling around the castle. While there are a couple of corridors to explore throughout the castle, you're actually best off running straight up through the middle of the castle and climbing the stairs to the very top, where you'll find the Commander of the Empire's army sitting on the throne. With no one to defend him, you can walk right up to him and challenge him. 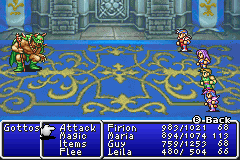 Gottos is fairly a simple boss, but he has two abilities that will make him far more challenging. On some turns, he may use an ability called Imbibe, which will actually have the same effect as casting Berserk, making his attacks far more powerful. He can also cast Haste, giving him a better chance at knocking one of your party members out before you can attack. As usual, casting Blink and Protect will increase your chances of survival, but they are no guarantee. Try casting Haste and Berserk on any pure attack member that you have to even the odds.

If you defeat him, the Rebellion will immediately resume control of the castle. Hilda and Gordon will each ascend one of the thrones and continue leading the rebellion from there. In addition, the town of Fynn will be restored to the citizens who fled from the empire's control. You will be able to return there to stay at the Inn and shop in the stores.

Speak with Hilda, and she will thank you for your help with reclaiming Fynn. Speak with her again after you regain control of your party, and she will express some concern that Minwu hasn't returned from Mysidia, which now have the ability to learn as a Key Term. Ask Hilda about Mysidia, and she will mention that you need two Masks to enter Mysidea tower, one of which is said to be in the basement of this very castle. Learn the term Mask, and ask Hilda about it and she will reveal a secret phrase, Ekmet Teloess which you must also learn. If you ask Hilda about it, she will say she doesn't know the location of the secret door which leads to the White Mask.

Then speak with Gordon, and ask him about Mysidia. He will mention the Ultima Tome, but if you ask him about it, he will only add that he's certain it will aide in the destruction of the Empire. If you ask him about the secret phrase Ekmet Teloess, he will say that Hilda knows more about the castle than he does, but if she doesn't know, he suggests that the Paul the Thief might have some idea. Finally, you can ask Hilda about the Ultima Tome, and she will tell you the story of it's purpose to drive monsters back through a passage that was opened to Hell.

At this point you are free to explore the castle. Fynn Castle is riddled with hidden passages. On the second floor, you will see two treasure chests, both of which contained forced fights, even after the castle has been reclaimed. There is an Aura Tome on the left and a Potion on the right. Two secret passages can be found, one on in the small chamber below the Aura Tome which goes to the corridor to the left and leads to a Werebuster mace, and one from the chamber of the potion which goes left and leads to a Giant Gauntlet.

On the first floor, there are three chests near the top of the castle, all of which contain Gil. There is a staircase located near the lower left corner of the castle which climbs up to the third floor. Along the left corridor of this floor, you will find a door which leads to the mirror chamber whose purpose has yet to be revealed. On the opposite side of the floor, along the right corridor, you'll find a small chamber with three chests, all of which contain status changing Black magic, including the Break Tome, Death Tome, and Toad Tome. 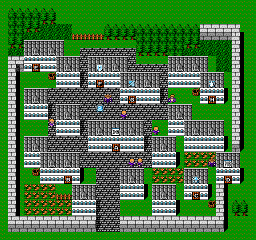 Now that you've plundered what you can, head out of the castle to visit the town of Fynn. While you're there, stay at the Inn to rest up, and visit the shops. The magic shop in town has four rare White magic spells that you may not have seen yet, including Dispel, Mini, Slow and Fog. In the lower left corner of town, you'll find a house which happens to be the residence of one Paul the Thief. Ask him about the secret phrase Ekmet Teloess. You'll pique his curiosity, and he'll want to know what you're after. When you tell him a Mask, he'll lose interest, and simply tell you to try using the phrase in the upper right corner of the audience chamber in the throne room. 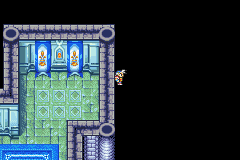 Say the secret phrase in this corner of the room.

Back in the throne room, check the wall to the right of the upper right corner. The game will say it looks like an ordinary wall, but give you the chance to "ask" something or use an item. Choose Ekmet Teloess, and you will reveal the secret door which leads to a hidden chamber. The chamber contains stairs that begin to descend down until you reach the first floor. The staircase at the bottom leads to the basement of Fynn Castle. However, before you dive down the steps, the castle contains one more secret. Examine the right side of the wall, and you should find a hidden passage to the grass on the right. Then come down and investigate the outer wall to your left to find one more hidden passage back in. A soldier will invite you to use the equipment that you find in the chamber beyond the door, which includes a Gold Shield, Gold Armor, and a Gold Cuirass. With those in hand, return to the original passage and climb down to the basement below.

The basement is fairly linear with few branching paths, and just means of getting from each floor to the next. Even many of the chests that you find offer mundane healing items, although there are a few high-value treasures to discover. All of the doors, with the exception of one on the bottom floor, lead to empty rooms. Each floor seems to have a theme when it comes to enemies. The first floor is loaded with undead creatures (so have Fire and even Cure spells at the ready.) The second floor is full of parasites and brain-type enemies. The halls of the third floor are largely occupied by Killer Mantises. The fourth floor contains a lot of fights against Adamantoises, Ogres, and Stalagmites. And the fifth floor is largely guarded by groups of Stalagmites, and the occasional Green Soul.

The fourth floor contains a chest near the top (marked A on the Floor 4 map) that contains one of two Blood Swords in the original version of the game. Later versions of the game reduce the number of Blood Swords available to one, and this treasure chest is switched to a Power Staff. Of particular note on the fifth floor is a single treasure chest containing the Orichalcum knife. It causes a forced fight against a group of monsters known as Rhyos, who have incredibly powerful breath weapons that can turn your party into stone. They are also strong offensively, but they aren't particularly well defended, so you should be able to do quite a bit of damage to them.

Finally, when you reach the upper corner of the fifth floor, you will see a set of six doors. All doors except for the second from the right lead to an empty room. Only the second door from the right leads to anything worthwhile; the hallway where the White Mask is stored. Additionally, there is a warp tile above the chest which brings you outside of the castle and saves you from having to backtrack through the basement, or cast spells to escape.