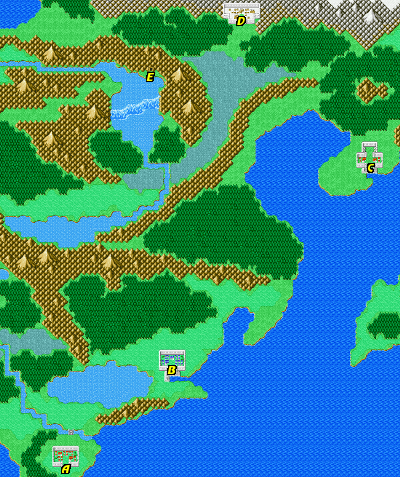 After showing Scott's ring to Hilda, and learning about Mythril, Hilda asks you to accompany Minwu to meet with Josef in Salamand to the Northeast. Minwu will join your party when you speak with him, and he'll and provide you with his Canoe which you can use to cross rivers and lakes. But you're getting more than just a boat, you're also getting a powerful ally, highly skilled in White magic.

Minwu's equipment
As for any other character, don't spend money to upgrade Minwu's armor; he won't remain in your party permanently, and the lower armor will allow for his HP to be upgraded often. Instead, give him a shield (maybe Firion's), so that his agility and evasion can be upgraded. His starting weapon is a staff, so you can train him with that weapon type, that includes staves and maces.

Minwu's spells
Minwu starts equipped with most white spells, i.e. all except Slow and the three offensive ones.

Minwu's attributes
He's a white mage, and as such has very high Spirit, Magic and MP. His other attributes are significantly lower than these three.

Towns of Palm and Poft[edit] 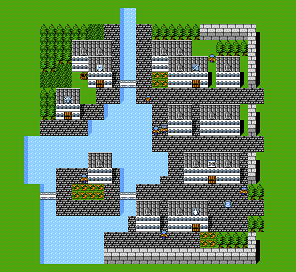 After leaving Altair, head north across the bridge, and walk straight up to the large lake above. Now that you have a canoe, you can hop in and row Northeast across the lake until you see the port town of Palm. You'll see a sailing vessel parked in the dock, but you aren't at liberty to hop in and sail around in it. Head inside the town.

Palm is apparently still enjoying freedom from the empire's influence. The first guy who greets you will offer to sail you to Poft for 32 Gil. This early on in the game however, it's a good idea to walk to locations if you can survive the journey. There are three protective White magic spells sold here. Protect will raise your defense, but Blink not only increases your evasion, it can actually help your evasion stat increase. Shell increases your magic defense.

You shouldn't need to purchase any weapons unless you feel like training any of your characters with another weapon. The armor here is better than what you've been able to buy, but the trade off in this game is that wearing better armor typically makes it harder for you to improve your stats, so it's generally recommended that you not improve your armor. 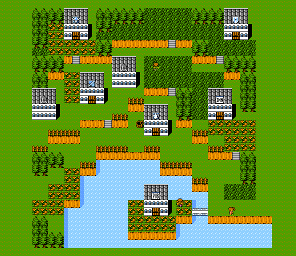 Once you are finished in Palm, you can either take the ferry to Poft, or simply choose to walk it and potentially gain experience and increased stats in battle. If you walk, simply follow the coastline to your right as it travels north, then east, and then a short distance south until you see the port of Poft come into view.

As with Palm, you'll find an idyllic sleepy town safe from the war waging around them. Salamand is to the north and Bafsk is to the east. All anyone can talk about in the pub is the fact that Bafsk is under empire control, and they're building something terrible. Seated in the pub is a man named Cid, who owns and operates an Airship transport service. Speak with him to learn the term Airship. To man to his right sells tickets to just about anywhere you want to go.

All of the stores in Poft are the same as Palm, so unless you are just stocking up on items like Potions, you shouldn't need to do any shopping. Apart from Cid, there really isn't anything else that sets Poft apart. You could use Cid's airship to fly to Salamand, but as usual, it's recommended that you try walking there and using the encounters along the way to strengthen your party. It's actually not that long of a journey. 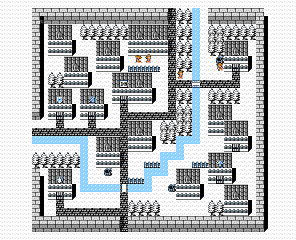 If you choose to walk from Poft to Salamand, simply walk north until you hit a snowy mountain range, and then walk west until you reach Salamand nestled into the mountains. When you arrive, you'll find that there aren't too many people around. You will learn that the empire has been mining Mythril from Semitt Falls, south of Salamand. You will also learn that the empire has enslaved all the men in Salamand and is forcing them to mine the Mythril.

The house in the northeast corner of town belongs to Josef, the man that Hilda assigned to learn more about Mythril. Approach him and ask him about Mythril. He will be taken aback by your question, and ask that you prove yourself to him first. He'd like for you to rescue the townsfolk held captive in Semitt Falls before he will help you. Even if you mention "Wild Rose" to him, he won't necessarily believe that you're with the rebellion.

You may wish to do some shopping in Salamand before you leave. The weapon shop here sells the first upgrades to the weapons that your original three party members start out mastering. You can purchase the Long Sword for Firion, the Battle Axe for Guy, and the Long Bow for Maria if you are still training her with a bow. The magic shop in Salamand is also quite special. Definitely purchase the Life spell. You can consider the other ones, but refrain from buy the Teleport spell since you will have an opportunity to earn one for free very shortly.

To reach the cave near Semitt Falls, you must travel south from Salamand until you are walking down a path between two mountain ranges. The path will begin to bend to the west, and you must cross a river by canoe to continue. Follow the path west until you are able to travel north. After heading north, you'll reach the bottom of another mountain range which you must follow east, along a path, until you reach the body of water above the falls. From here, it's a short canoe trip to the right to reach the cave entrance.

Be aware that as you travel through the cave, you will encounter quite a few enemies that you have never seen outside, and a few of them are tougher than most enemies that you have faced so far. Green Slimes are especially notable because they are highly resistant to physical attacks and require magic to defeat them reliably.

The cave descends several floors, but it isn't extraordinarily complex, so you shouldn't have trouble navigating it. One feature of dungeons that you will first encounter here are the doors to empty rooms. These doors deposit you in the middle of rooms with extremely high encounter rates, making it difficult to escape without being thrown into a battle or two to get out. As soon as you realize you are in such a room, turn around immediately and head for the door.

You'll find the slaves held on the third floor behind the left of three such doors. Inside, you'll find Paul, the master thief, standing next to Nelly, Josef's daughter. Borghen has been holding her captive to thwart Josef. Paul tried to be the first to bring Mythril to Hilda, but got caught instead. Paul escorts all of the slaves out of the mine, leaving you to explore the rest of it for yourselves. 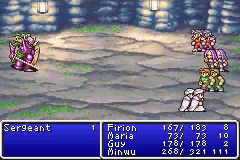 Upon reaching the fifth floor, you'll see a long bridge to the left, and two doors above. The left door contains the boss of the cave who happens to be guarding a shipment of Mythril. The boss is a Sergeant who happens to be wearing some incredibly tough armor, rendering physical attacks virtually useless against him. You'll want to lean of offensive magic like Fire, Blizzard, or Thunder, to defeat him. If for some reason you never bought any such magic, there happens to be a Fire Tome in a treasure chest on the fourth floor. He has a pretty good attack as well, but it's nothing you shouldn't be able to overcome with Cure magic. Defeat the Sergeant to gain access to the chest behind him, and the Mythril contents inside.

Before you leave the cave, you should explore the region beyond the long bridge. Near the top of the floor you'll find a lone treasure chest. In this chest is your free copy of the Teleport Tome, but the chest is rigged with a monster trap, forcing you into battle with a Land Turtle upon opening it. Like the Sergeant, the Land Turtle is pretty resistant to physical attacks, but like all reptiles, it is weak against cold magic, so use Blizzard against it liberally.

After you've collected the Mytrhil, you can have Minwu cast Teleport to instantly escape from the dungeon. Or you can collect the Teleport Tome from the treasure chest on the fifth floor, teach it to one of your party members, and use it. Once you're back outside, you'll need to hike back to Salamand. If you visit Josef, he is so grateful that you've rescued his daughter, he will happily talk about whatever you want to know. However, since you already possess the Mythril, you don't really need his help anymore.

You'll need to return to Altair. While walking is recommended throughout this game, this can be a long hike, and you should be at a level of experience where continued battles in this section of the overworld produce diminishing returns. So you may wish to walk back to Poft, and hire Cid and his airship to give you a lift back to Altair, although it will cost you quite a bit of Gil.

Once you return to Altair, before you go to visit Hilda, be sure to drop by the weapon shop. Speak with Tobul, the old man who is secretly the greatest blacksmith around, and show him the Mythril. He'll be so excited, he'll get to work immediately. You won't have to wait at all before you can begin to purchase Mythril equipment from the weapon and armor stores.

Go speak with Hilda. She believes that the theft of the Mythril will have thrown the empire off of their plan. She will ask you to visit Basfk in order to investigate the progress of the Dreadnought. Learn the term and ask her about it. She will tell you that she has a man in Basfk, and that she'd like you to destroy it or delay it's completion.