Final Fantasy II/Mission to the Colosseum

You'll need to return to Altair to continue. From Deist/Bafsk, you have some options. Due to the weird nature of the map, you can either begin sailing due north until you cross the northern/southern hemisphere boarder and travel up the sea until you arrive at Altair from the east, or you can sail to the east, crossing the eastern/western hemisphere boarder, and travel across the land until you return to Altair. As usual, consult the map (

) to prevent yourself from getting lost.

Once you make it back to Altair, all anyone seems to be talking about is how strange princess Hilda has been acting lately, laughing whenever people speak to her. Speak with Gordon and he will express the same concern, asking you to speak with her to see if everything is alright. Princess Hilda can be found in her room, which is located directly below the king's chamber. (Before you enter the room, unequip Leila's equipment if you do not want to lose her equipment as she will leave you after this sequence.)

Hilda will invite Firion to speak with her in private, so your other party members will leave. The princess tries to seduce Firion who, wishing not to be rude, steps closer at her request. When he does, the monster who was impersonating Hilda reveals herself. At that point, Firion's companions burst through the door to aid him in the fight. 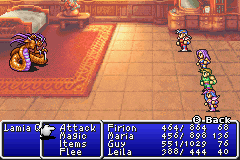 The monster is a Queen Lamia. She has a powerful attack that not only causes a lot of damage, but also puts its victims to sleep. You'll need to doll out Cures to anyone who gets hit, but you may also wish to have the Basuna spell ready to go in case too many members of your party fall asleep. In addition to all of this, she has the power to cast a level 16 Blink spell, making her nearly impossible to hit physically, and a charm spell that can turn your party members against one another. After she is defeated, a guard and Gordon will enter the room. They have discovered that the real Princess Hilda has been captured by the Emperor, and he is offering her as the prize at the Arena's fight. Gordon will insist on accompanying you, so Leila will leave you in order to assume Gordon's duties around Altair. 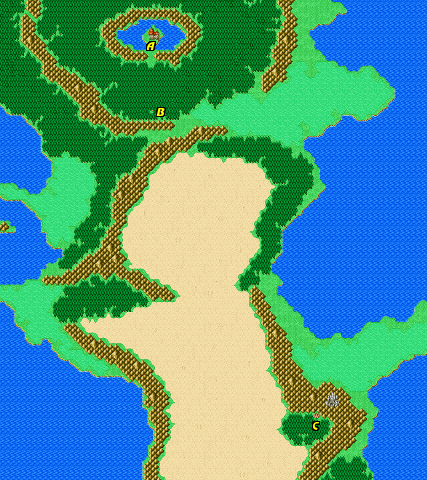 You will hear reports that the Arena is located in Palamecia, which can be found directly south of Kashuan Keep, through the desert. However, if you don't wish to travel all the way around to Bafsk in order to travel south to Kashuan Keep, there's a quicker method from your current location. Simply travel north west from Altair and approach the desert from the south. You'll find the Arena off to the right side of the desert.

Note that it is incredibly important that your party be sufficiently strong enough to handle the next section. The enemies inside can demolish your party and end your game if you're not careful. If you have been taking the time to ensure that your stats have been steadily increasing, you should be alright. But save your game outside of the Arena just in case you find that you are not as powerful as you need to be, and need to grind a little bit to increase your chances. The Antlions and the occasional Chimeras that you encounter in the desert near the Arena are good targets.

When you enter the Arena, there's only one path to follow. As you get close to the figure on the throne, two gates will arise, trapping you in the fighting pit. The figure will turn out to be the Emperor himself. He will wish you well and initiate the fight. A monster will stomp out of the holding gate and attack you. This monster is the Behemoth. 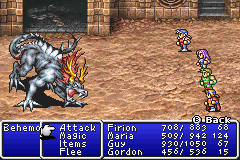 Naturally, the Behemoth is quite strong, with both a powerful defense and offense. Just how powerful really depends on how strong your party has become. But you'll want to do the standard preparation, casting Blink and Protect on your party, and attack with your most powerful offensive spells to speed up how long it takes to defeat the Behemoth. If you can, use a Sleep Sword to put the Behemoth to sleep as frequently as possible.

Upon defeating the Behemoth, the Emperor will invite you to approach, which your party sees as an opportunity to slay the Emperor. However, the Emperor has been on to you all along. Knowing your identity, he has prepared his guards to arrest you as he disappears from the room. The next thing you know, you are in a jail cell.

Lower basement
If you check the door of your cell, it is sturdy and won't move. But a man will appear to distract the guard and the knock him out. It's Paul the Thief who is returning the favor from when you rescued him in the mines. Once you are free, you can move about the lower level. You can even cross the water sections to reach other doors. In fact, you can freely move around the floor without fear of being attacked. However, when you enter through the doors, it's another story.

Many of the doors lead to empty rooms with very high encounter rates, from which you must escape. And the enemies that appear in these rooms are extremely powerful. From Chimeras who you've met before, to Magician-type and undead enemies that cast powerful spells. If you encounter such enemies, you should definitely cast Shell to protect yourself from the spells they cast, particularly Toad and Break. Your game will end if everyone in your party is transformed into a toad or a statue. Also beware of powerful plants known as Death Flowers.

There are only a handful of treasures on this floor, and none of them are unique pieces of equipment, they're all recovery items. One, an Antidote, is in a chest all by itself which causes a forced fight. The other three are in a room together, but you have to search all the doors in order to find it. The door which leads to the exit is found in the upper right corner. Enter it and take the stairs to the floor above. 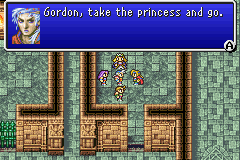 The freedom you enjoyed to walk the hallways without fear of being attacked is no longer present on this floor. The same powerful enemies who were only relegated to the rooms below now roam the corridors and can attack you any time. In addition, a new enemy known as Parasites can attack you and directly drain your MP. Your only goal on this floor is to locate the cell that Hilda is kept in and rescue her. (Unequip Gordon before you enter Hilda's cell, as he will depart in order to get Hilda to safety.)

A couple of shortcuts to Hilda's cell are available. If you walk along the top of the floor and down the right side, there is a false wall just below the right-most cell, where Hilda is imprisoned. Alternatively, as soon as you walk on to the floor you will notice a cell immediately to your right. Walk up along the right side of the wall (on the other side of that cell's left wall) and you'll find a false wall near the top of the room. Go through it and you will notice the gate is locked but you can exit out through another false wall on the lower right side of the wall. The next cell to the right has the exact same entrance and exit through false walls. So walk through the upper left portion of the wall and out through the bottom right. The princess' cell will be to your right. Walk to the front of the cell and interact with it to open. Taking either shortcut reduces the amount of enemies you encounter before rescuing the princess.

Once you accomplish that, make your way to the staircase in the lower left corner to reach the first floor and flee the Arena. When you are safely outside, it's time to return to Altair once again. You may wish to return here at some point in an effort to obtain Osmose tomes, dropped rarely by Wizards. You have a higher chance of running into them inside of the locked cells. If you already completed the cyclone mission and the mission to the Palamecia castle, this is the only place you will be able to pick up the Osmose tome. Although it is rare, the Wizards may drop it.