Final Fantasy II/Mission to the Cyclone

If you make your way first to Altair, and on to Gatea, or even Palm, you will notice that the towns have been decimated. They are in such disarray that the game does not even zoom into the towns when you step on them on the map. Something has systematically wiped out every town in the world. Your only choice is to go to Fynn. When you get close to Fynn, you'll catch a glimpse of what was a responsible for all the destruction: a giant cyclone.

The townsfolk and castle guardsmen will all be concern about the cyclone, which apparently assaulted Fynn once already, and people feel that a second attack will assuredly destroy the kingdom. Leila is also back at the castle, revealing that she was lost in the shipwreck but she doesn't offer any advice. If you go and speak with Princess Hilda, she will express dismay about the cyclone, which you can now learn as a key word. Hilda believes that the cyclone is following the will of the Emperor. Speaking with Prince Gordon won't reveal any more significant information, believing that the only way to stop the cyclone would be to somehow get inside of it without getting hurt. 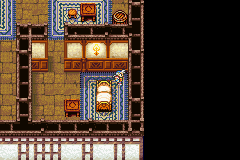 Enter through this wall of Paul's house.

Before you proceed, it would be wise to visit the Town of Fynn, and pay a special visit to Paul's house again in the lower left corner. Speak with Paul, and ask him about the Cyclone. He will be so impressed by your brave intention to enter the cyclone, that he will offer his stash of incredible treasures in an effort to aide you. He invites you to push against the wall to the right of his bed, and if you do so, you will find eight treasure chests. In these chests you will find; Black Garb, Thief Gauntlets, an Elixir, Silver Cuirass, a Blood Sword, a Gold Hairpin, a Gold Cuirass, and a Ruby Cuirass. You cannot save this activity for later; if you wait until you complete the Cyclone, you will lose the opportunity to obtain these items.

Most of these items will be familiar to you, but the one that may stand out is the Blood Sword. If you're playing the original NES version, this should be the second one you obtain, but if you are playing any of the remakes, this is the first and only sword of its kind. When glancing at it in the Equip screen, it doesn't appear to be very special, but it has the power to drain the enemy's hitpoint to the wielder. It is also incredibly useful in particular boss battles, so holding on to it is quite essential. 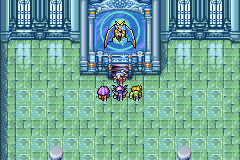 Once you've cleaned out Paul's treasure trove, return to Fynn Castle. If you haven't already, ask Hilda about Wyverns. She will reveal that in the past, they summoned Wyverns by shining the pendant in front of a mirror in the castle. You have a pendant, and if you explored the castle thoroughly, you may recall finding a mirror. To get to the mirror, you must return to the first floor and locate the stairs in the lower left corner. Climb them up to the third floor, and walk straight up to the door above, and you will enter the room with the mirror. Use the pendant in front of the mirror and you will observe the egg you placed in the Spring of Life at Wyvern Cavern begin to hatch. The newly hatched Wyvern will take flight and arrive at the castle. Ricard will step forward, reuniting Dragoon with Wyverns one final time. Unfortunately the Wyvern takes off out a window, but don't worry she'll show up right when you need her.

The Cyclone is located just behind Castle Fynn, to the northeast. Now that you have a Wyvern at your disposal, you can approach the base of the Cyclone (on foot). Upon doing so, the Wyvern will reappear and carry your party into the air, and into the heart of the Cyclone, where a floating fortress can be seen. The Wyvern will deposit you at the base of the fortress. While you won't see the Wyvern as you traverse the fortress, you can summon her in battle to use her firey breath on your opponents. Select "Items" from the battle menu and scroll to "Wyvern" to unleash her attack.

The main theme of this fortress is that most floors contains two staircases to the next level; one which leads to treasure and dead-ends, and another which actually takes you up to the next floor. Depending on how leveled up your party is, the difficulty of the monsters you face will vary, although few if any require a special strategy.

You'll start out on the first floor. As you walk counter-clockwise around the bottom, you'll reach the first of two staircases. Take it up to the second floor, and just above where you arrive, you will find an incredibly powerful knife known as the Ripper. Then head down from the chest and keep following the path as it curves up and around to another staircase. Climb up to the third floor and head down. You will reach an electrified floor which damages your party like lava. Continue down across it and then head left. You'll reach a chest at a dead-end. This chest contains the Poison Axe. Equip either weapon if any of your party members are proficient with knives or axes. Now you must return to the first floor.

Once you're back, head left to the second staircase on the first floor, climb up, and follow the short path on to the third floor. Walk over to the left and climb up the first staircase you come to. On the fourth floor, head up and explore the passages on either side to find chests containing two types of Diamond armor equipment. Then return to the third floor, walk down the hallway a bit and proceed to the next stairs to climb back up to the fourth floor.

On the fourth floor, you may start to encounter powerful enemies called Wood Golems. They are particularly weak to Fire-based attacks so use them liberally. Additionally, now that you've summoned the Wyvern, you can use the Wyvern in battle to attack all enemies with his fiery breath weapon. Walk to the right along the bottom of the floor and you will soon reach two staircases within close proximity of one another. Take the left staircase first up to the fifth floor. Begin walking to the left and down the left side of the floor. Ignore the electrified section and continue to the bottom, where you can find two chests. The one on the right contains the powerful Defender Blade. The one on the left offers the Diamond Armor, but not without a fight against two incredibly powerful Generals. Depending on the number you encounter, this fight can be difficult, so be prepared to cast defensive spells if there is more than one General. 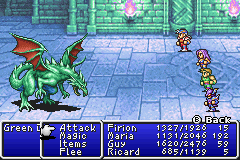 After collecting this equipment, return back to the fourth floor. Ignore the stairs beyond the electrified floor, as it leads to the inner portion of the sixth floor which contains nothing but empty rooms. Upon reaching the fourth floor, climb up the staircase on your right, and follow the short passage to the next staircase to the outer layer of the sixth floor. You arrive in the lower left corner, and you can take either direction to reach your destination in the upper right corner. When you get there, you will see a chest just outside of the staircase. Inside you will find a Wood Flute which has the power to summon a Cyclone in battle. However, protecting that flute is a Green Dragon which you must defeat in battle. The Green Dragon's attacks are poison based. As a result, it's weak against lightning attacks, and you should have anyone in your party who can cast Thunder do so until the dragon is defeated. The dragon can also be poisoned, oddly enough, so make use of those Poison Axes that you've been collecting in this dungeon! Additionally, the Green Dragon is weak to attacks from the Blood Sword, so you may wish to equip that weapon at this time. 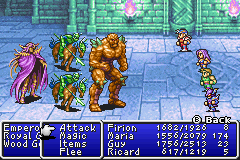 Once you defeat the Dragon, climb the steps. Walk up to the top of the room, and approach the emperor on his throne. He will speak with you before he sics his Royal Guard on you. This won't be a new enemy, as you are likely to have encountered them throughout the fortress. The number you encounter will be random between two and four. After defeating them, the emperor will try the same trick again. You may encounter more or less than the previous fight. Defeat the second round and he will attack you personally... along with more Royal Guards and a Wood Golem. You must defeat the entire group to win the fight. Use the Blood Sword on the Emperor, and use the Wyvern while there are still other enemies present.

Upon defeating the Emperor, you are immediately transported back to Fynn Castle. Hilda will congratulate you and wish to celebrate your victory. A party is held in your honor. However, in the middle of the party, a soldier will rush in with an emergency communication: Leon has declared himself Emperor of Palamecia and will launch an attack on Fynn.