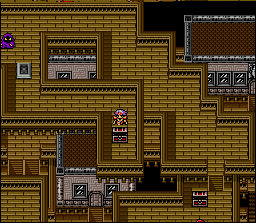 The first step in obtaining the Excalibur sword is to retrieve the Rat Tail from the Passage of the Eidolons (Cave of Monsters on SNES). Go into the passage and continue on until you reach the area where the monsters live. For assistance in traversing the cave go to that section of the walkthrough. Go immediately to the left when you reach that area, and continue around the circle until you see another staircase. Go down the stairs, then back up the stairs, turn around and open the chest behind you to get the Rat tail. Exit the cave. 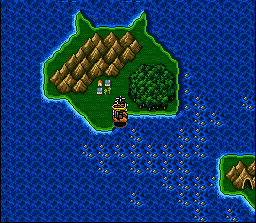 Exit the underworld, and fly to Mythril (assuming you are in the airship capable of holding the hovercraft). Fly south to the string of small islands, and drop the aircraft and land on the one that has mountains and a small town. From there, take the hovercraft to the island with a cave on it. Enter the cave, and when prompted give the Rat Tail to the people in the cave. They will give you the Adamant. 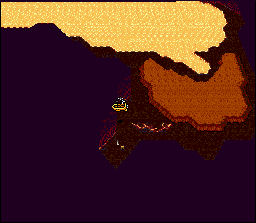 Return to the underground in the airship. Fly to the bottom right hand corner of the map, and land near the small cluster of houses. Inside it is a single house. Go into this house, and down the stairs to the right. Use the adamant on the dwarf in the bed. 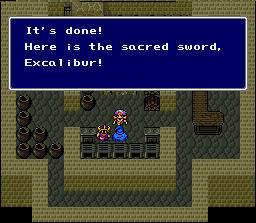 The Smithy will begin to forge the sword immediately on the first floor. If you have not yet been to the moon, he will tell you it is not ready. But once you have been to the moon he will give it to you when you speak to him.