Final Fantasy IV: The After Years/Prologue: Return of the Moon

The wars of the past have come to a close, with the Lunarians and their moon a distant memory. Peace has returned to the Blue Planet, and prosperity once lost has been rediscovered. Yet, new winds of change are about to sweep over the land. As the Crystals glow quietly, dark shadows in the world stir anew, and a new moon appears in the sky...

The introductory scene starts off much like it's predecessor, Final Fantasy IV, aboard an airship of Baron's Red Wings. As Ceodore, Cecil's son, walk around the deck and talk (

) to everyone aboard. After all the talking is done, you'll land on the Adamant Isle. Once you have control of Ceodore again, walk to the small town to the northwest, Mythril.

Upon entering Mythril, Biggs and Wedge will give you a brief overview of how the phase of the moon can affect your battle capabilities. To view the current lunar phase, just open up the menu with

. To advance to a full moon and continue the story, you'll will have to rest a night at the inn. Before you do, talk to the villagers and explore the town a bit. In the tall grass on the east side of town, you'll find a hidden Tent (look for a patch of grass you can't walk through and hit

to check for hidden items). There's a Potion hidden in the tall grass in the northeast corner of town and a Ruby Ring in the grass behind the weapon shop. With the Ruby Ring in hand, talk to the pig in the recess between the armory and weapon shop, he'll give you 500 gil as thanks for returning it to him. Though not much is available, you may wish to buy some weapons, armor or items at this point to prepare for the coming battles. When you're ready to move on, go to the inn and get some sleep.

Once you wake up, exit the town and head southeast to the cave-like opening in the mountains. After speaking with Biggs, grab the equipment in the chests before you, then talk to Biggs again and he and Wedge will join your party. Finally, speak to the person guarding the stairs and descend into the grotto.

After heading north, you'll quickly find yourself thrust into your first fight. Biggs and Wedge will likely do most of the work here, you can choose to use only their melee attacks which are more than sufficient to defeat the monsters. As you turn at the top to go down a flight of stairs, Biggs and Wedge will give you an introduction to Band attacks, moves that allow multiple teammates to band together for one attack. To use a band attack, you must first press

at the command list then select Band. From here, choose the party members you wish to Band with and then press

. With the demonstration out of the way, head south for a Potion and follow the path around to the next set of stairs for a Tent. Cross the bridge and head northwest for a chest containing Ether, then exit via the stairs to the east. 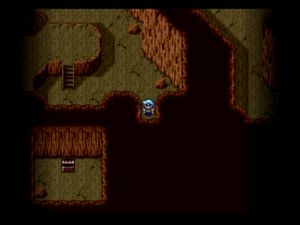 The entrance to the secret passage and the room with the iron gloves.

At this point, Biggs and Wedge will send you off on your own. Head through the gold door ahead of you and use the save field to save your game. You can also pitch a Tent here to rest and recover. After saving, head out the north exit and follow the path around, being sure to collect the treasure chest items (a Bomb Fragment and Eye Drops), to an exit in the southeast corner of the room.

In the next room, keep following the rather simple path, stopping to collect items as you go (Bronze Hourglass, Tent, Antarctic Wind and Echo Herbs). After grabbing the Echo Herbs, head south to a recess in the otherwise straight wall. This is the entrance to a secret passage leading to a chest containing Iron Gloves. Exit the secret room and make use of the save point behind the gold doors, then exit the main room via the southwest staircase.

In the next room, Ceodore recognizes the chest containing the Knight's Emblem, but when you open it...

The Sand Worm really should not pose too much of a challenge. Just keep whacking at it with your sword, using healing magic/items as needed. Place survival above all else, just keep healing as much as you need to. At some point, the Sand Worm will use Whirlwind, bringing Ceodore down to 1 HP. Biggs and Wedge will rush in to help only told be told to stay back. When the battle recommences, Ceodore will suddenly awaken his latent potential, fully healing him and making him stronger. A couple more hits from your sword should bring the beast down.

When the battle's over, Ceodore will learn a new ability (Awaken) and Biggs and Wedge will rejoin the party. From here, just backtrack to the grotto entrance and return to the airship. Once on the airship, tell the soldier you'd like to return to Baron. On the flight back Biggs and Wedge will commend you, only to be cut short by an attack by a pair of Belphegor. They have a lot of HP, but should be rather easy to defeat; use Fira. Once the monsters are dead, the screen will fade out and you will be in Baron Castle controlling King Cecil.

A soldier comes bursting into the king's throne room to inform Cecil that monster's have breached the castle. Leaving Rosa behind, Cecil will head to the keep's entrance. Since guards are blocking both the main exit and the west exit, you've no choice but to head right. You'll quickly find out just how close the monsters have gotten when you end up in a fight with a pair of Gargoyle. It should only take one hit from your sword to take each one down, so the fight shouldn't be too trying.

When they're dead, hit the switch on the north wall to get at the chests which contain a Tent, Decoy, and Phoenix Down. After grabbing the items, head up the eastern stairs and onto the battlements, where you'll be attacked by a Zu and three Cockatrice. Focus on the Zu first, as the small fries will only cause about 1 HP of damage each. Next, head down the next set of stairs. There's a save point in this room, so now would be a good time to heal up and save.

Exit the save room then head north, to the back of the castle, and enter the East Tower. On the fist floor, grab the Hermes Sandals, Hi-Potion and Red Fang. To get the contents of the rightmost chest, head downstairs then come right back up the stairs and turn to the chest to net an Ether. The only thing worth staying downstairs for is a Remedy in the isolated pot on the right. Once you've grabbed all the items, head to the second floor for more items. In the upper-right pot are Echo Herbs and in the bottom-center, Bacchus's Wine. The chests here contain a Hi-Potion and a Heavenly Wrath.

Up on the third floor you'll find a robed figure attacking a woman. Before you help her, grab the Remedy and 500 gil from the chests closest to you. Now you may fight the Ogre (on whom you'll get a Preemptive Strike) who can be fairly easily killed with your sword. With the Ogre dead, you can get the Bomb Crank he was blocking.

Now backtrack to the keep's main hall (where you started), making sure to use the save point along the way. Upon returning to the main hall, you'll find that the western path has been cleared, so make your way to the stairs. A soldier will come tumbling down the stairs and collapse at your feet. You'll quickly be attacked by

This fight can be a bit tough because the Centaur Knight can deal considerable damage—as much as 1/4 of your total health—rather quickly. You will need to keep using Cura to stay alive and get in attacks only when you feel you can do so safely. It should really only take 3-4 strikes to kill the Knight, but it will only take 3-4 strikes for him to kill you. Alternately, you may wish to use a damage-dealing item against him. One Bomb Crank is all it takes to drop this monster. Though a Bomb Crank is a bit excessive, doing around 200 damage more than his max health, it's a handy way to end the fight quickly if you're running low on MP with which to heal yourself.

When your battle is finished, head up the stairs, across the battlements, and down another set of stairs. In this room, Rosa will stop you and, after talking some sense into Cecil, join the party. As soon as you walk outside, a cutscene will begin as Cecil, Rosa and others around the world witness the return of the Red Moon...

Go to top
← Walkthrough | Prologue: Return of the Moon | Ceodore's Tale: The Last of the Red Wings →